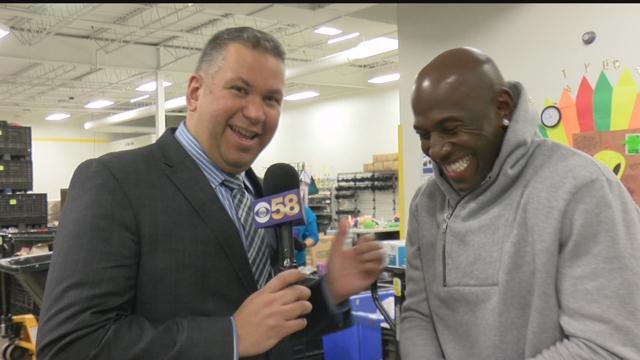 It's nothing new to see Packers Donald Driver giving back to the community that loved watching him play.

“Amazing opportunity for me. You get to see what people do every single day, and that's donate items to an amazing cause, and today I got an opportunity to go out there and receive those items,” said Driver.” It's cold outside right now, especially taking those donations, I was out there freezing. I think I've been in Texas too long. My blood has kind of thinned out a little bit.”

Kevin Holden spoke to Driver about the snow conditions during the Texans.

“On Sunday, I was watching the game and I was like wow, I do miss that, you know but not all the time. just on game day,” said Driver.

Driver has at least two trips planned to Wisconsin next year, and both involve halls of fame.

“I'm going to be the true emcee. It'll be great to get to see one of my good friends, Charles Woodson, go in as well as Ron Dayne, Sherry and also Bud Selig,” said Driver.

Driver takes the leap into the Packers hall of fame July 22nd.