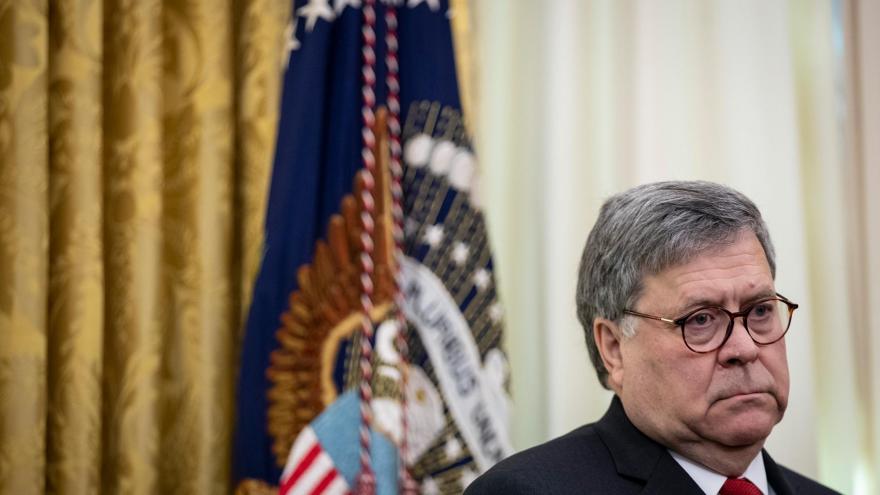 The Department of Justice said it expects to take action next week regarding the impact social distancing regulations are having on religious institutions across the country.

(CNN) -- The Department of Justice said it expects to take action next week regarding the impact social distancing regulations are having on religious institutions across the country.

Attorney General William Barr "is monitoring (government) regulation of religious services," said Justice Department spokeswoman Kerri Kupec on Twitter late Saturday. "While social distancing policies are appropriate during this emergency, they must be applied evenhandedly (and) not single out religious orgs."

Kupec said to "expect action" from DOJ this week, but it's not clear what action the department may take. The department can bring lawsuits against municipalities or join legal challenges brought by churches. But courts already are dealing with the issue.

Kupec, in the tweet, did not provide additional details on what specific action the department is planning.

While many states have implemented "stay-at-home" orders, a dozen or so states have made exceptions for some form of religious gatherings.

A federal judge on Saturday issued a temporary restraining order, ruling that a Louisville, Kentucky, church can hold a drive-in church Easter service -- a ruling that overturned an effort by the city's mayor to stop the service. The order doesn't involve in-person church services, which are already prohibited by the governor's executive order banning large gatherings.

A Justice official said Barr is examining multiple instances around the country, not just the case of Louisville's, where it appears religious institutions may have been singled out in Covid-19-related public gathering restrictions.

Government can legally limit assemblies, including religious gatherings, to protect health and safety, the official said. But the government may not impose special restrictions on religious activity that do not apply to similar nonreligious activity.

If a municipality imposes fewer or no restrictions on movie theaters, restaurants, concert halls and other comparable places of assembly, it may not order houses of worship to close or limit their congregation size, according to the official.

In an interview on Fox News on Wednesday, Barr called current restrictions to mitigate the spread of coronavirus "draconian," as the White House coronavirus task force's health experts have lauded such measures as helpful to lowering the rate of spread.

The attorney general said he'd "hate to see restrictions on religion continue longer than they are strictly necessary" and that when the Trump administration's recommended period of isolation ends April 30, "we have to consider alternative ways of protecting people."

Asked by Fox News' Laura Ingraham if he would take action should a state or local official keep restrictions solely on religious gatherings after April 30, Barr said, "We're going to keep an eye on all these actions that restrict people's liberty."

This story has been updated with additional comments from a Justice official.