Dog that tried to save owner from fire released from hospital 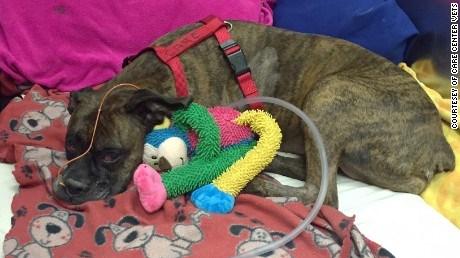 A dog that nearly died after apparently trying in vain to protect her owner from a house fire in Ohio was released from an animal hospital and is now home with her new family. Carmen, a 9-year-old boxer, went home Monday with Phil Ledford, the brother of the dog's deceased owner, after recuperating for nearly two weeks at CARE Center veterinary hospital in Cincinnati.

When firefighters responded to the blaze in Goshen Township earlier this month, they found Benjamin Ledford unconscious in the basement with his Carmen laying across his face, seemingly trying to shield her owner from the heat and toxic fumes.

Carmen was also unconscious, but rescuers were able to bring her around. Ledford was rushed to hospital but was pronounced dead after arrival, according to CBS affiliate WKRC.

WKRC reported that Carmen was able to come off oxygen support and had her nasal tube removed on Sunday.

The fundraising page set up to help Carmen and the family had collected nearly $30,000 by Wednesday morning.