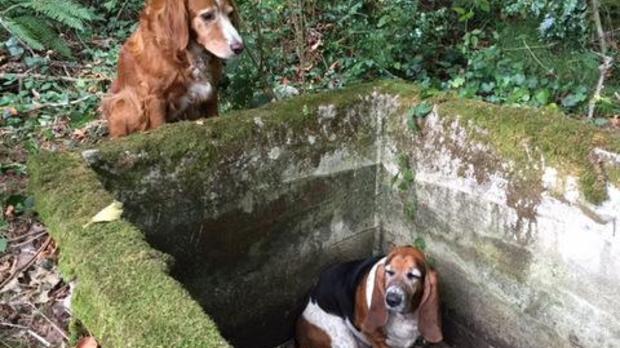 That sums up the story of canine friends, Tillie and Phoebe, perfectly.

The two dogs ran away from their Washington state home last week without a trace.

Five days after their disappearance, the Vashon Island Pet Protectors (VIPP) -- a non-profit organization that runs a lost and found operation to reunite lost animals with their guardians -- stepped in to help their distraught owner.

Amy Carey, a VIPP volunteer whose the first to respond to a lost dog call, made it her mission to find the canines. She was hoping someone, somewhere would see them.

Little did she know, Tillie would lead the way.

"We received a call from a community member reporting that for the past few days a 'reddish' dog had been coming up to them when they were out on their property and then promptly heading back into a ravine," Carey reported on Facebook Monday.

So, with "a needle in the haystack hope," Carey and her rescue crew made their way into the ravine. When Tillie's name was called, the group could hear a faint one-woof response.

After following the sound of her barks, Carey spotted Tillie laying beside an old cistern with poor Phoebe stuck inside.

"Every breath was held and every doggie prayer offered that the peek over the rim would somehow find her safe," Carey recalled in a Facebook post.

Luckily, she was -- and the two dogs slowly made their way back home, safe and sound.

"This is an amazing story about Tillie being a true friend and heroine," Carey told CBS News. "But it's also about the importance of not giving up."

Carey is using the dog's powerful story to give owners of lost pets a reminder: When trying to find a missing dog, us two leggers need to pay attention to even the smallest clues.

"If you have a lost pet and are not getting regular sighting reports, there is a high chance that they are stuck somewhere be it over a slope, in a building or in this case -- in a cistern," Carey warned.

Thousands of people shared the story of Phoebe and Tillie.

"Such an amazing story. Love the happy ending," another replied.

It truly is a story that shows "a true friend and a humbling example of the power of love," Carey said.