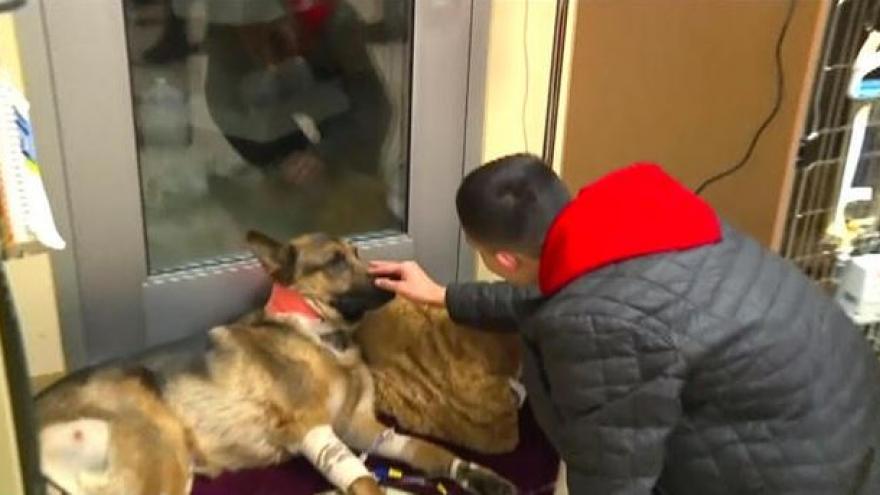 LOS ANGELES (CBS News) -- Sixteen-year-old Javier Mercado was home alone at his home outside Seattle Wednesday when he heard strangers banging on a glass door. "I heard it shatter and that's when I dialed 911 and went into the closet," he said.

His 2-year-old German Shepherd, Rex, did what came naturally.

"My dog sprinted downstairs and started barking really loud, and I could hear everything," Javier explained. "I could hear them getting closer and closer through the creak in the floor. Then one of the guys screamed, 'Get the dog, the dog bit me, the dog bit me!' Then I heard one gun shot, then several after that. My dog cries after each shot. It's the worst thing I've ever seen."

"You know they didn't hesitate shooting Rex and hold back on anything," Javier said. "If Rex wasn't there, they would have opened that door and they would have saw me in there."

Javier and his mother, Julia, weren't sure Rex would make it. He's now stable but needs several surgeries.

Donations are pouring in to help pay the bills.

"Rex. He's an angel. He's my four legs angel that we had at our house," Julia said.

"I just want to thank my dog," Javier said. "If it wasn't for him, I don't feel like I'd be standing here right now."

For more information about Rex, you can check out the family's GoFundMe page.

UPDATE: Rex underwent surgery Friday night to repair a fractured bone in his left hind leg, caused by a bullet wound. A statement from BluePearl Veterinary Partners says the surgery was successful, and that veterinarians also examined the bullet wound to his neck and found "no evidence of damage to the esophagus or trachea." According to the statement, Rex will be examined on Saturday "to determine when he can go back home with his family."