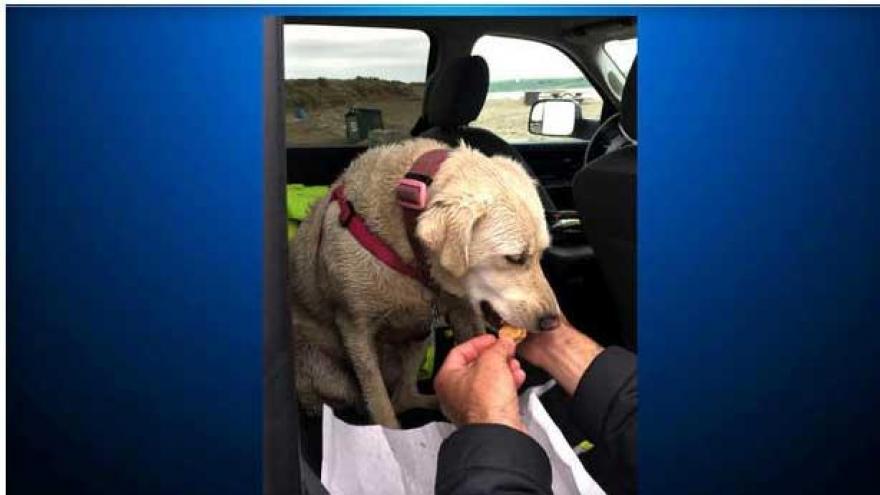 TOMALES BAY, Calif. (CBS NEWS)-- A dog that was thought lost during a fatal boat accident Monday was found alive by firefighters Thursday morning, according to authorities.

Two Marin County battalion chiefs were scouting locations for a firefighters’ water rescue orientation around 11:30 a.m. when they encountered the missing dog hunkered down under a rock outcropping, CBS San Francisco reports.

The yellow Labrador retriever -- named Yoda after the Jedi master in Star Wars -- had been on board a 13-foot Boston Whaler that capsized in rough surf at the mouth of Tomales Bay around noon Monday.

Brian Phidat Ho, 47, of San Jose, died in the accident. Ho’s fishing partner and one of the two dogs on the boat were rescued shortly after the incident by Sonoma County Sheriff’s Office personnel, but Yoda was missing and presumed drowned.

Battalion Chiefs Chris Martinelli and Graham Groneman were in a boat a quarter of a mile north of Dillon Beach when they spotted a pale yellow object on the rocky shore.

“They were hugging the coastline when they saw the dog hunkered down under a rocky outcropping,” said Marin County Fire Battalion Chief Bret McTigue. “They went on shore and put a life jacket on him. He was wet and shivering after a few days out in the elements.”

Survived, he did. Though cold, Yoda matched the description of the missing dog and suffered no apparent injuries.

He was brought to the Tomales Fire Station to warm up by a fireplace and be fed. The Marin Humane Society checked him out before releasing him to a family member.

McTigue said the family was at Ho’s funeral when they were informed Yoda was alive.

“We gave them the update and they were able to make the announcement about the dog at the funeral, which was nice,” said McTigue.