Dog missing since July is reunited with original owner

NOW: Dog missing since July is reunited with original owner

MILWAUKEE, Wis. (CBS 58) – Two dogs went missing back in July. One was reunited with its owner; the other was kept by the person who found it.

It’s an illegal action that the Milwaukee Area Domestic Animal Control Commission (MADACC) is now sharing as an example of what not to do when you come across a stray animal.

It eventually turned out to be a happy ending for this particular dog owner.

As of Sunday, both dogs made it back to their original owner. But MADACC says there’s an important lesson for everyone in this story.

On Sunday MADACC posted a message on Facebook after someone had dropped off this Shibu Inu. The post goes on to say they quickly realized that dog was Nala who had gone missing in July with her husky sister. 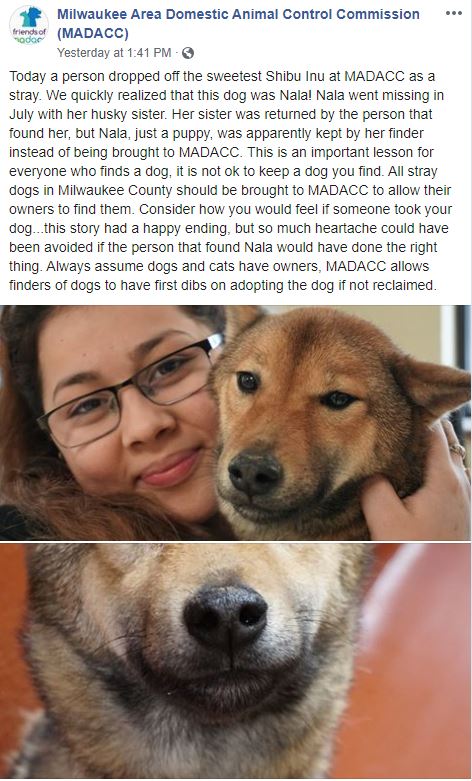 The husky was returned to the owner while Nala, who was a puppy, was kept by someone rather than taken to MADACC. Deciding to keep the animal is illegal.

If you find an animal and take it to MADACC you can have the opportunity to legally adopt if the animal goes unclaimed for five days. The only exception is an injured animal.