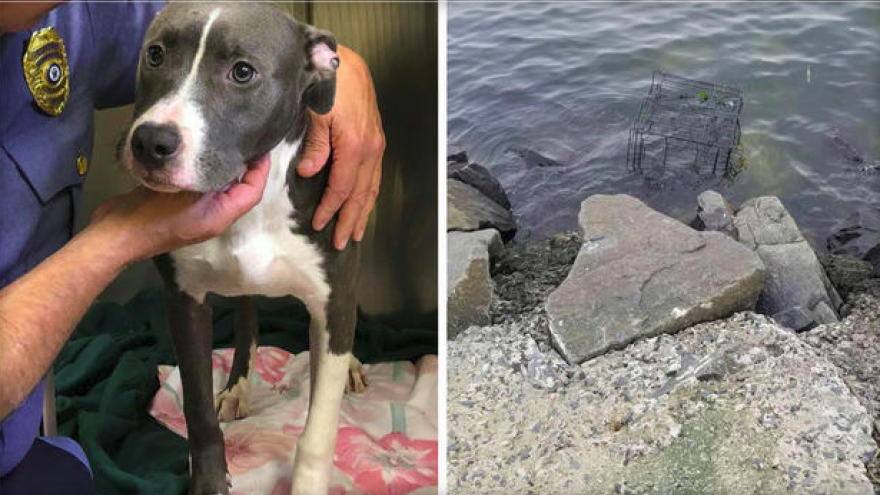 (CBS NEWS) -- A New Jersey woman who rescued a 1-year-old pit bull from drowning in a crate is planning to adopt the dog, now named River. Jenniffer Vaz was starting her day by walking her dog Molly to catch the sunrise at Sandy Hook Bay when she heard whimpering on the waterside of the rock bulkhead.

"Molly was noticing something and wanted to take me off the trail," she told CBS News. "When I looked down in the water, I saw River and I saw his little black eyes looking back at me."

With no hesitation, Vaz then climbed over the wall to save River – along with Molly.

"Molly actually followed me and assisted me," Vaz said. "She went into the crate and licked him and he followed her."

Officials said the cage was on a small portion of land between the bulkhead and water – and at the time of the rescue around 6:15 a.m., water had already reached the cage.

River was taken to the Highlands Police Department, who then called animal control. When the team arrived at the scene a few hours later, the cage almost covered by the rising tide.

In a Facebook post, the Monmouth County Prosecutor's Office announced it was seeking help in finding the person responsible for leaving River in a black wire cage in Veterans Memorial Park.

"If not for the heroic rescue act of the good Samaritan, the dog could have potentially drowned," Monmouth County Prosecutor's Office wrote on Facebook.

Yet despite everything River went through, he is in good condition, Monmouth County SPCA says.

When she saw the poor pup inside the cage, Vaz couldn't believe someone could do this.

"I was in disbelief that this poor little creature was in this crate and the water coming up," she said. "I knew right away someone was trying to kill this dog."

But a happy ending could be in store for River. Vaz is looking to adopt him once she gets the all-clear from Monmouth County SPCA. In the meantime, she will serve as his foster parent until the case is resolved.

"It just feels like the right thing to do," said Vaz, who picked him up Wednesday. "He feels like he's part of our family."