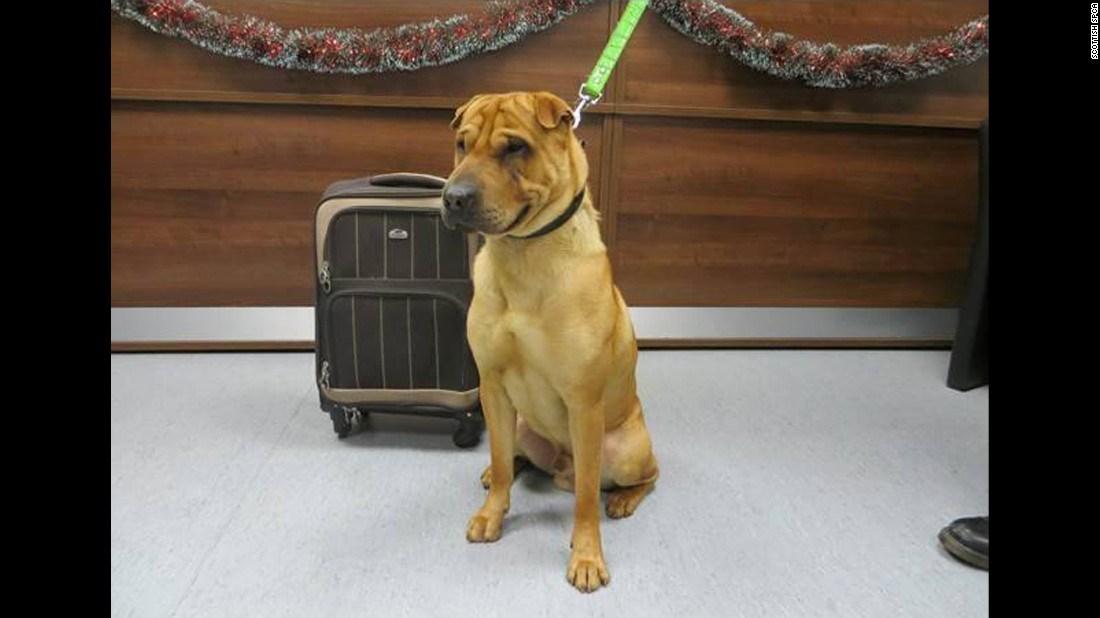 (CNN) Authorities in Scotland are looking for whomever abandoned a mixed-breed dog outside a railway station, along with a suitcase containing his food and other belongings.

The Scottish SPCA is appealing for information on Facebook after the male shar-pei crossbreed was discovered Friday night, tied to a railing outside the Ayr train station. Beside him was a suitcase with some of the dog's belongings, including a pillow, toy, a bowl and food.

Heart-tugging photos of the forlorn dog attracted thousands of shares and sympathetic comments on social media, with many people offering to adopt him and condemning his former owner.

\"Poor lad, what a thing to do to him,\" wrote one woman on Facebook. \"I hope his future is brighter.\"

SPCA Inspector Stewart Taylor said the dog is microchipped, allowing authorities to find out his name: Kai. The SPCA contacted the owner registered to the microchip, who said they had sold Kai online in 2013 but did not know the address of the person who bought him.

\"This case highlights the potential consequences of selling an animal online as it often leads to the impulse buying of pets that people know very little about,\" Taylor said in a post on the Scottish SPCA's website.

\"Regardless of the fact Kai was left with his belongings, this was still a cruel incident and we are keen to identify the person responsible. If anyone can help we would ask them to get in touch as soon as possible.\"

Kai is about two to three years old and is \"a lovely dog with a nice nature,\" Taylor said.

\"We will look after him until we can find him a permanent and loving home.\"

Some people noted that Kai's plight echoes that of Paddington, the fictional bear in a series of popular kids' books, who was adopted by a family after they found him sitting on his suitcase at Paddington Railway Station in London.

Abandoning an animal is an offense under Scotland's Animal Health and Welfare Act, and anyone found guilty of doing so can expect to be banned from keeping animals for a fixed period or even life.