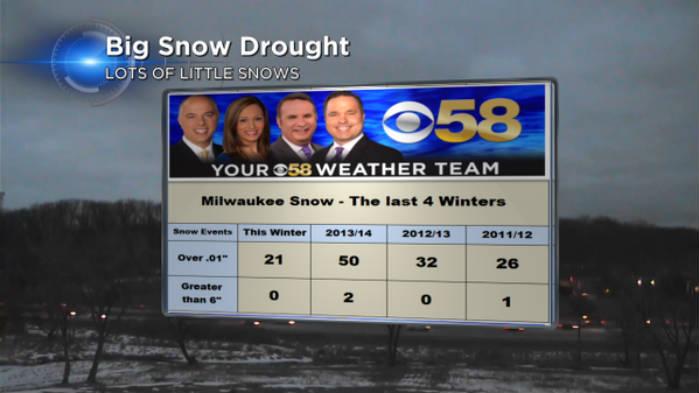 It's an interesting thought for our winter season... Will the somewhat quiet season we've had so far mean more snow this second half of winter?

Since October, we've had 17.4\" of snowfall in Milwaukee. The normal amount during this timeframe is 27.1\". This leaves us down nearly ten inches so far.  Could we just be having a slow start to winter, or will it remain relatively quiet? To delve further into that question we look back at our history and ahead to any significant impact on long term weather patterns, like El Nino, that could influence our weather over the next few months.

One way the National Weather Service in Milwaukee looks at the historical snow is by way of a scatter plot.  The scatter plot diagram below shows the relationship between snowfall the first and second half of winter.  This particular plot is real data for the city of Madison. So let's check it out, and let's focus on the circled red dot in the top right part of this diagram. This dot shows a healthy 55\" of snow from October through January 25th. If you draw a line back to the left you'll find that the second half of that particular winter also received a lot of snow, 47\" to be exact. Okay so that was a snowy winter. What about that dot down in the bottom right corner, what does that show?  It shows a very snowy start to the season with over 50\", with less than 10\" for the second half of winter.  Hopefully you're getting the idea of how to read this plot.  Now, just take a general look at the plot and focus on the highest concentration of dots.  From this stance, it appears that most winters feature about equal amounts of snow from first to second parts of the winter.  I'd estimate most winters drop about 15-20\" from the first half to the second half of the season, just by looking at the concentration of dots. But it also shows that a quiet start may end just as dry or become more active. The final take away using this method is that there really isn't a strong correlation between what happens during the first part of winter to the second part.

If we added a dot on this plot for Milwaukee it would be closer to the bottom since we're at 17.4\" to date.  The total average snow in a year for the city is about 47\", that leaves us with about 30\" to go.  As of today, there are no strong atmospheric indicators for a snowy rest of the season.

In the short run however, we are tracking some snow for this weekend. And it could pile up!  A storm system that is currently in the desert southwest will track across Illinois this weekend. And as we sit just north of this passing storm, we are looking to get hit with some snow. The second part of this story is that we're also bracing for northeast winds to pick up.  This could lead to lake enhanced snow showers. The duration of which could lead to some decent snowfall. But it's a tricky set-up as a cold front will be dropping in from the north prior to the storm arrival. If the front arrives early on Saturday and a stronger high builds in its' wake, it could very well nudge the storm farther south leaving us with less accumulation. This morning I had one model spit out 1-2\" and another one churn out nearly 10\", which makes this forecast quite difficult to deliver with a high amount of confidence.

The bottom line is that snow showers will be around into Sunday, and it will be gusty at times. These weather conditions will lead to slippery stretches on roads and the wind will lower visibilities and perhaps lead to some blowing and drifting snow.  Keep a close watch on forecasts this weekend if you have travel plans, especially closer to the lake.

Our First Alert weather app is another great tool we provide viewers free of charge to help you stay ahead of the storm.  One unique feature our app offers is \"future\" radar. This is an important tool that can help you track when the heaviest snow will fall, and where!  There's a link to get our app on the weather section of our web page. Keep in mind you can always reach out to us in the First Alert Weather center if you have questions about the forecast, the app or if you need help with other weather related questions.