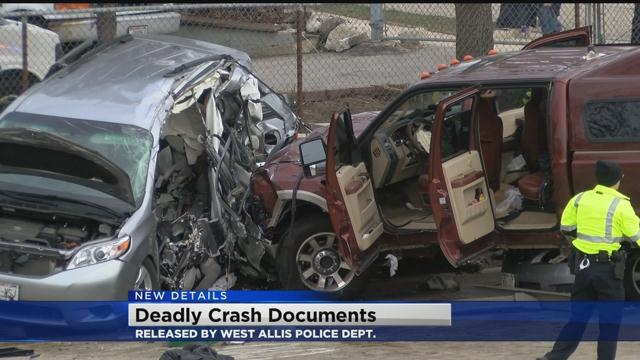 The West Allis Police Department's report is more than 150 pages.

With video, interviews and the 911 calls from that day we now have a closer look at everything that unfolded when the crash happened.

Police interviewed a 49-year-old man who was driving another truck on Hawley Road at the time of the accident.

The man told police he noticed Larson’s truck when he was in the left lane on Hawley Road and Larson passed him.

Larson’s truck allegedly was going 10-15 mph over the speed limit and came up on a medical transport van and made a sudden lane change.

The man said he caught up to the pick up at the red light at Main Street and Hawley Road.

He said he was in the left lane and he changed lanes to the right lane. He noticed construction barrels partially blocking his lane in traffic.

The man told police he wanted to get ahead of Larson so when the light changed green he accelerated and “punched the gas to the floor.” He estimated he was going 40-45 mph but the truck was next to him and pulling away. He backed off the gas and continued to watch the truck accelerate. Larson allegedly was going 55 mph at this point and continued to accelerate. The man noticed a van slowed down but didn’t’ make a complete stop, and then he witness the crash. He told police he does not recall Larson trying to stop before the crash.

Here is a transcript of one of the 911 calls:

Caller: “I was just calling to let you guys know, 801, there's a really bad car crash, bystanders are trying to do chest compressions on him right now, there's no police here yet but I wanted to make sure you guys were aware.”

That was just one of several 911 calls that went out after the crash on Hawley Road on April 4th.

According to the report, police found three beer cans, a near empty bottle of apple flavored vodka, and a cocktail drink in the back of Larson's Ford F350.

After witness statements and Larson's slurred speech he was taken into custody.

Larson told police he consumed four beers before the Opening Day Game while tailgating and then one after the game. But, Larson said he didn’t consume beers while at the game because he couldn’t afford them.

During the course of the investigation it was revealed there were five passengers in the car with Larson.

According to the documents, all five passengers had been consuming alcohol and were released to sober drivers.

Except for one female passenger who was taken to the hospital for her injuries.

Youruba Sly Lundasi, an Uber driver and his passenger Wendell Johnson both died at the scene.

CBS 58's Amanda Porterfield is digging through these documents right now...she'll have much more coming up on the news at 10:00 PM.