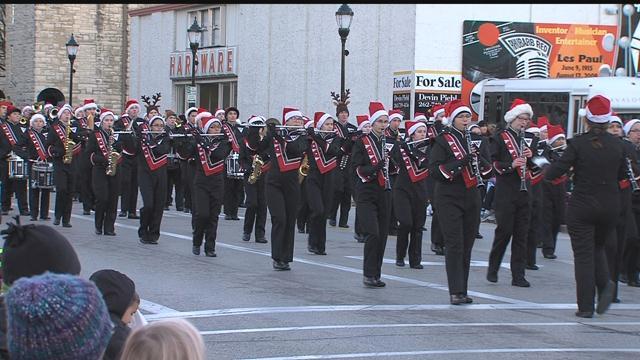 This year's theme was Star Spangled Christmas and the floats and marching units in the annual Waukesha Christmas Parade didn't disappoint.

Gorgeous sunset on Sunday afternoon to usher in a parade that is colorful and bright for the first half and then takes on a magical glow as the rest of the units march among the lights down Main Street.

Everyone seemed to delight in the idea of adding a little red, white and blue to their red and green decorations.

The victorious Division 3 Football Team from Catholic Memorial received a hearty round of applause.

They were fresh off their state championship win and boarded trolleys along the route.

Many of the young men thanking the folks who offered their support throughout the season.

He received a special height waiver to join the corps in 1973.

Many heeded Drew's advice to dress warmly, although all the taverns, shops and restaurants were open to give parade goers a warm up whenever they needed it.

Some may say it's not even Thanksgiving yet, but the crowd who gathered in Waukesha certainly seemed to agree that "we need a little Christmas, right this very minute."