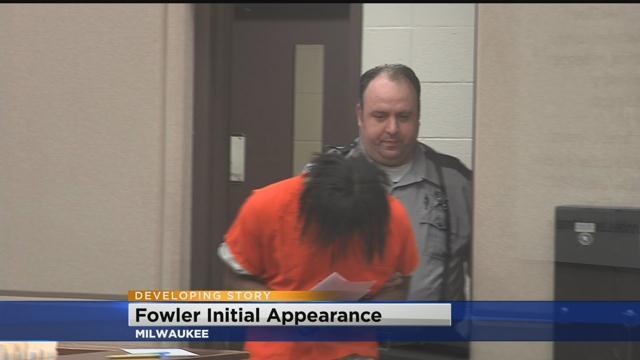 An ugly display in a Milwaukee courtroom Monday as the double murder suspect described by sources as "heartless and without emotion" appeared for the first time since his capture while on the run.

He has been charged with two counts of first degree intentional homicide.

He fled the state but authorities caught him in Arkansas. On Monday a court commissioner made sure he couldn't get out on bail. The state asked for a million dollars admitting it was a big request.

However, after Patrick Fowler made several outbursts in court the court commissioner made her decision.

Head down Patrick Fowler shuffled his way into a Milwaukee County courtroom, accused of murdering a mother and her daughter.

Fowler held pink paper over his face while prosecutors asked the court commissioner for a rare bond.

“In all my years I haven't recommended what I am going to recommend,” says the prosecuting attorney.

However, it didn't control his mouth.

As the state got ready to request a one million dollar bail, Fowler said, “Shut up and just say it.” The courtroom official told him to be quiet.

“The state believes that a million dollars cash is appropriate here. Like I said I have only recommended that 5 times in my career but this is a disturbing case,” says the prosecuting attorney.

Authorities picked Fowler up in Arkansas and say he had two tickets to Texas. Prosecutors say he is a flight risk, however, it wasn't the details of this case that prompted Fowler's outbursts.

Instead - hearing his own long record of sexual assault, domestic violence and battery. Fowler will be back in court later in April.

He also credits metro investigators for identifying the suspect quickly working with agencies to find him then bringing him back to Milwaukee.