District attorney: No charges against Christopher Manney in fatal shooting of Dontre Hamilton 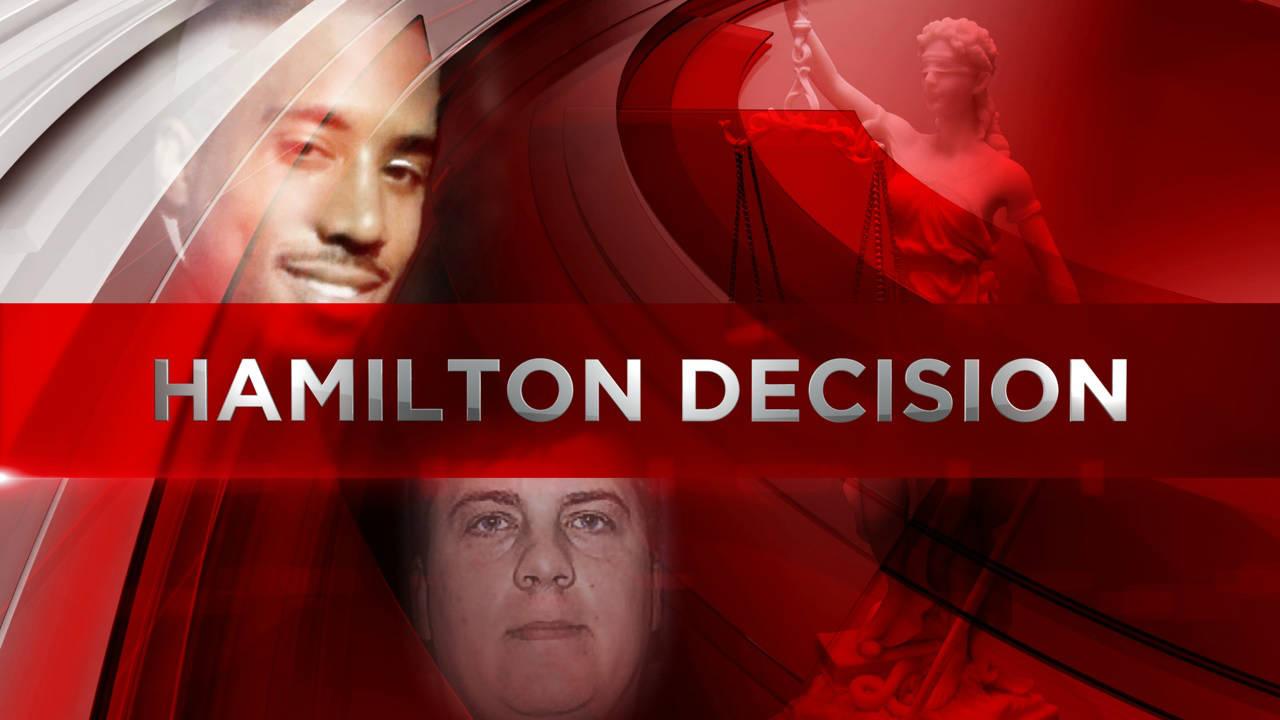 The District Attorney's Office released a 30 page document detailing the shooting of Dontre Hamilton. According to the report, a request for a welfare check was placed with police dispatch at 1:52 p.m. An employee at the Red Arrow Park Starbucks asked for assistance with Dontre Hamilton who was asleep next to the kiosk. The first two officers to respond to the scene spoke with a cooperative Dontre Hamilton, and determined he \"was not disturbing anyone\". The two officers were called back to Red Arrow Park for another call related to Hamilton from Starbucks employees. Officers informed the Starbucks employees that Hamilton was not doing anything wrong. Officers left the park at 3:00 p.m.

The report says two Starbucks employees did confirm the called police about Hamilton. They told law enforcement police officers did tell them Hamilton was not doing anything wrong, and he could sleep in the park if he wanted to.

Officer Manney was the first officer contacted in response to the call for assistance at Red Arrow Park. His Sergeant left a voicemail on his cell. Manney heard that voicemail about a half hour after two officers responded to that scene for the second time. Manney asked dispatch if there was an assignment related to Red Arrow Park, and was told there was not. He requested he be recorded as responding to a trouble with subject at Red Arrow Park. This led to Manney's encounter with Hamilton.

The District Attorney's Office noted in their report that the law does not allow for anyone to sleep, camp or lodge in any park not designated for overnight lodging, tourists, or trailer camps. The penalty for breaking this law is minimum fine of $10 and maximum fine of $200.

The district attorney's report included the account of events from Manney. The report says Manney was armed with a .40 caliber semi-automatic pistol, a wooden baton, and OC spray. Manney told investigators when he intended to speak with Starbucks employees before speaking with Hamilton, but Hamilton's eyes \"snapped\". Manney says this led him to believe Hamilton might be under the influence of drugs or alcohol or may have mental health concerns.

Manney says that's when he asked Hamilton to stand up and conducted a pat-down frisk of Hamilton. According to Manney, Hamilton resisted the pat-down frisk and began fighting. Both Manney and Hamilton traded blows until Hamilton took possession of Manney's baton. Manney says he fired his weapon while walking backwards until Hamilton was completely on the ground. Manney said he decided to use his baton and not his OC spray, because his spray was located on his right side. Manney was using his right hand to protect himself from Hamilton's attacks.

According to the Chisholm's report, investigative materials and forensic evidence were provided to law enforcement training experts and to use of force experts at both the state and national level. The only condition placed on the experts was that they render an opinion based on their professional opinion without influence from the respective law enforcement agencies involved in the case or from the district attorney's office.

Lt. Patrick Martin of the Greenfield Police Department, a certified use of force instructor for the State of Wisconsin trains police and came to this conclusion:

“This was not a passive pushing and pulling between Mr. Hamilton and Officer Manney, but violent struggle and a dynamic assault against Officer Manney. Using court cases, state statutes and the training guides as overall basis for determining the justification for the use of force by Officer Manney against Mr. Hamilton; and going through the incident step by step, there is only one conclusion to draw: Officer Manney's use of force throughout the entire incident, up to and including deadly force, is justified”.

Lt. Martin encouraged further consultation with a national use of force expert.

The Milwaukee County District Attorney's report included statements from several witnesses near the scene of the officer-involved shooting  in Red Arrow Park on April 30, 2014.

Two of the statements came from Starbucks employees, one of whom repeatedly called Milwaukee police on Hamilton, even after being told by police that Hamilton was doing nothing wrong.

A Starbucks employee identified as \"JK\" told investigators that she called the Milwaukee police non-emergency number because a man was lying down in Red Arrow Park. She saw two officers respond to the park and leave the scene. JK called Milwaukee police again because Hamilton was still in the park. The same officers returned and told JK directly that Hamilton was allowed in the park and was doing nothing wrong. JK later saw Manney with his arms around Hamilton, who had been sleeping in the park. She saw Manney pull his baton and hit Hamilton twice. She told investigators Hamilton grabbed the baton from Manney and started moving towards him. She then heard five to seven shots. JK did not say why she kept calling police, even after being told that Hamilton was doing nothing wrong.

A second Starbucks employee identified as \"KB\" also gave a statement to investigators. She told investigators that her co-worker \"JK\" said she was going to call the police because a \"homeless man\" was sleeping in the park. Two officers responded, spoke to Hamilton, and left. When JK came back from a break, she said she was going to call police again because the \"homeless man\" was still in the park. Officers responded and directly told KB's coworker JK that Hamilton was not doing anything wrong and was allowed to be in the park. Later on, around 3:30 p.m. KB saw Officer Manney (she recognized him from previous encounters) talking to Hamilton and telling him to, \"sit down, relax\". KB later saw Hamilton standing with the officer's baton raised in a defensive posture. Manney tried to get his baton back from Hamilton and saw Manney pull out his gun. KB says she did not see what happened next, but heard ten to 15 shots. KB is the same woman who wrote a detailed account of the events on the Occupy Milwaukee website.

Another witness, identified as \"JK\", told investigators he works at a building near 3rd and Kilbourn. He walked to Starbucks and saw Hamilton lying on the cement walkway of the park. As JK was walking, he passed a Milwaukee police officer who was walking towards the person on the ground. JK heard yelling behind him and saw the officer yelling commands at Hamilton while he was on the ground. Hamilton stood up and faced the officer. The officer pulled out his baton and hit Hamilton twice--in the back and near the shoulder. JK told investigators that Hamilton grabbed the officer's baton and hit the officer one of two times on his upper body, back and shoulder area. After being hit, the officer stepped back and drew his weapon. The witness said Hamilton was still wielding the baton in what the witness called an aggressive posture. The witness told investigators he heard between five to six shots and the individual fell to the ground.

A witness identified as \"RB\", works on the second floor of City Hall and was in his office when he heard gunshots. RB grabbed his binoculars and went to his office window, where he saw Manney standing in Red Arrow Park with his gun drawn and pointed at Hamilton. He saw Manney fire his gun and heard between five and seven shots. RB saw Hamilton fall to the ground and saw Hamilton clutching a black rod that could have been a baton. After the shooting, the witness saw the officer go down on one knee as other officers arrived and started CPR on Hamilton.

A witness identified as \"PT\", told investigators that she was in a break room at on office in the 200 block of E. Kilbourn, talking on

the phone, when she saw a police officer trying to catch up to a man, who was walking away from the officer. The officer had a police baton in his right hand and hit Hamilton four times. PT told investigators that Hamilton was able to get the baton away from Manney and, as soon as he seized it, swung it at the officer about two to three times. She was not sure if Hamilton actually struck the officer, who was backing up. PT says Hamilton continued to advance toward the officer with the baton in his right hand. The witness says Manney drew his handgun and fired two or three shots, continuing to fire shots until the Hamilton fell backward. She saw Manney kneeling after the shooting.

Another witness, identified as \"LM\", told investigators that he saw Manney confronting Hamilton around 3:30 p.m. in the park face to face. He saw Manney pull his baton and hit Hamilton with it about four to five times. He said that Manney and Hamilton were “dancing around” and saw Hamilton take the baton from Manney. LM saw Manney swing the baton at Manney  two to three times, using an overhead motion, but was uncertain as to whether Hamilton actually hit Manney with it. He saw Manney push Hamilton away and draw his gun. LM heard Manney order Hamilton to “drop

the baton” and said that Hamilton still had the baton raised in an overhead position, and did not drop it. He saw Manney fire two shots, and saw Hamilton flinch and jump back. The witness says Manney fired another six to eight shots and believes that there may have been one to two shots fired by the police officer as Hamilton fell to the ground.

A witness identified as \"MP\" told investigators she left work just before 3:30 p.m. and saw a Milwaukee police officer walk into Red Arrow Park. She saw the officer approach Hamilton, who was lying on the ground. She saw Manney motion to Hamilton to get up. MP said Hamilton got up and walked towards Manney. Manney began a pat-down and heard what sounded like a scuffle between the two. She saw Hamilton with a baton in his hand and saw him charge at the officer. She hid behind a building once Manney drew his weapon and heard six to eight shots soon after.

Other witness statements indicate that Manney continued firing shots even after Hamilton was on the ground. Statements from Milwaukee police officers who responded indicate that a baton was near Hamilton's body or in his possession when they arrived.

In a written decision, Chisholm wrote, \"After reviewing all the evidence, I believe there can be little serious doubt that P.O. Manney was justified in firing at Dontre Hamilton, who was attacking him with a deadly weapon (baton).\"  During his news conference, Chisholm referenced a case where the Wisconsin Supreme Court repealed a common law allowing citizens to resist unlawful arrests. Read the details of that case here.

The Wisconsin National Guard has been deployed in the City of Milwaukee at the request of Milwaukee County Sheriff David Clarke. Several public officials are anticipating violent protests in downtown Milwaukee. None occurred.