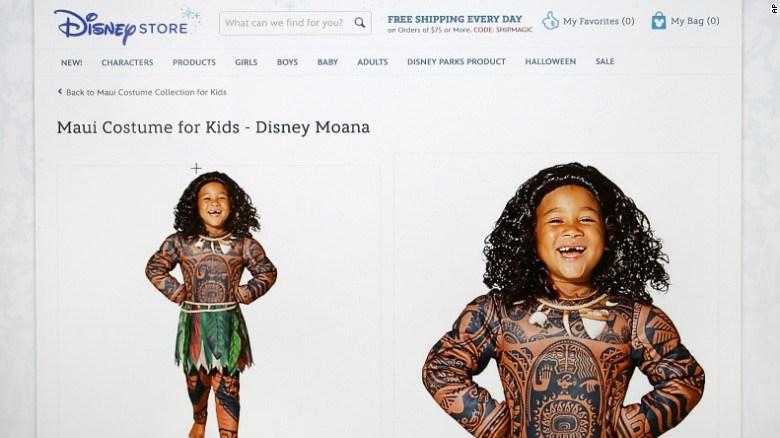 (CNN MONEY) Disney has halted sales of a costume inspired by its upcoming "Moana" movie after being accused of racism.

The costume is based on Disney's animated depiction of Maui, a key figure in Polynesian oral tradition. It featured full-length brown trousers and a long-sleeved shirt covered in "tattoos," as well as a "skirt" made of leaves.

Traditional tattoos are imbued with deep meaning in Polynesian culture.

Chelsie Haunani Fairchild, who described herself as Polynesian and a native Hawaiian, said the costume was an example of cultural appropriation. It was wrong to sell a costume that allowed children to pretend to be another race, she said.

"It's disgusting," she said in a video posted to YouTube. "This is inappropriate, and it's not okay."

Disney apologized and said it was pulling the costume from its website and stores.

"The team behind Moana has taken great care to respect the cultures of the Pacific Islands that inspired the film, and we regret that the Maui costume has offended some," Disney (DIS) said in a statement.

Fairchild said that even before the costume row, she was nervous about how Disney would depict Polynesian culture in the film, which is scheduled to be released in November.

The movie tells the story of a teenager named Moana who embarks on a sailing mission in hopes of saving her people. During the trip, she meets Maui, a demigod who helps guide her through the Pacific.

Moana's character is voiced by Auli'i Cravalho, a 14-year-old native Hawaiian. Maui is played by Dwayne Johnson, who is also known as "The Rock."