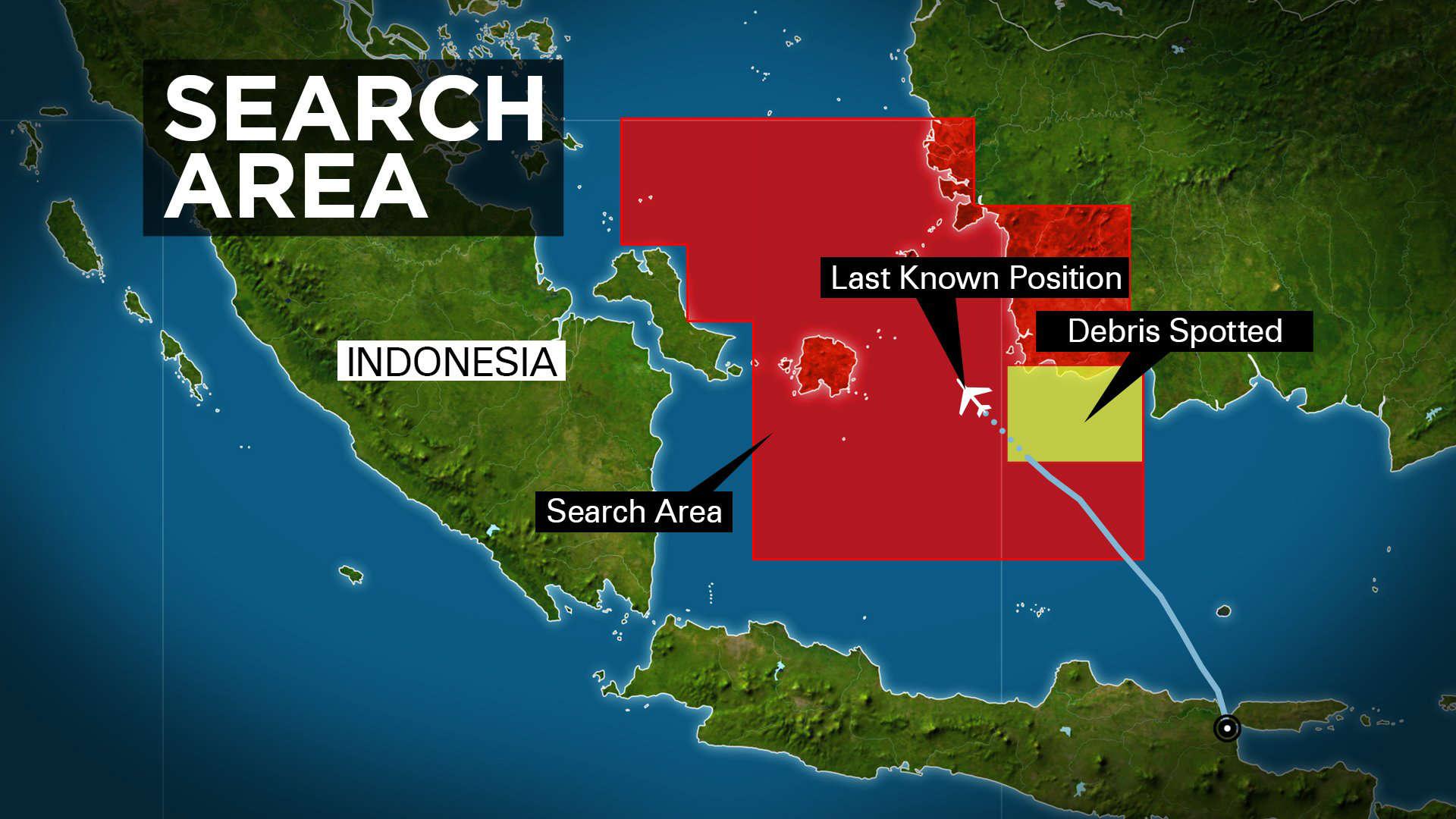 Indonesian searchers using sonar equipment have located wreckage from Air Asia Flight QZ8501 at the bottom of the Java Sea, a search and rescue official told CNN on Wednesday. At the moment, they still don't know if it's in one piece or broken up.

Debris from the plane was spotted on Tuesday about 10 kilometers (6 miles) from the aircraft's last known location over the Java Sea, off the coast of Indonesia's Central Kalimantan province on Borneo.

Six bodies have been recovered -- one of which is believed to be a flight attendant, Indonesian search and rescue chief Bambang Soelistyo said, according to the Indonesian state-run Antara news agency.

"To the relatives, I feel your loss, and all of us pray that all of the families are given the strength and fortitude during this incident," Indonesian President Joko Widodo told journalists. He then went to meet with families.

"We are sorry to be here today under these tragic circumstances," said Sunu Widyatmoko, head of Air Asia Indonesia. "We would like to extend our sincere sympathies to the family and friends of those on board QZ8501. Our sympathies also go out to the families of our dear colleagues."

"My heart is filled with sadness for all the families involved in QZ 8501," Air Asia CEO Tony Fernandes tweeted. "On behalf of Air Asia my condolences to all. Words cannot express how sorry I am."

Later, speaking with reporters, Fernandes said there is now "at least some closure" for families that might have been "holding out hope."

Hospitals in the Indonesian city of Surabaya are being prepared to help house and identify bodies being recovered off the coast of Borneo.

As families watched a live news conference about the discovery of the debris and saw video of a helicopter lowering a diver to what appeared to be a floating body, some people fainted. Stretchers were brought into the room.

Family members burst into tears, dabbing their eyes as officials passed out tissues. Some sat with their eyes full of tears, hands covering their mouths or heads buried in their hands. Others had phones jammed against their ears.

Soelistyo, the head of Indonesia's search and rescue agency, said the debris was discovered when a crew on a military aircraft spotted the shadow of an object that looked like a plane in the water.

Further searching found floating objects believed to be the bodies of passengers, and then what appeared to be an emergency exit of the plane. Officials sent other search teams racing to the area.

Several nations are contributing resources to the effort, including the United States. The U.S. Navy destroyer USS Sampson arrived Tuesday.

The USS Fort Worth is also being prepared to deploy from Singapore, Pentagon spokesman Rear Adm. John Kirby told CNN on Tuesday. It "can be ready to sail in a day or two to get on station and can be there very quickly," he said.

The United States is also preparing maritime patrol aircraft that could help, he said.

The flight, which was lost Sunday on its way to Singapore, was carrying 155 passengers and seven crew members. The overwhelming majority were Indonesians. There were also citizens of Britain, France, Malaysia, Singapore and South Korea.

Search and rescue teams are diverting all their resources to where the debris is, in the Karimata Strait, about 110 nautical miles southwest of the Indonesian city of Pangkalan Bun, Air Asia said.

Divers and ships with sonar equipment are being sent to the site, where the water depth varies between 25 and 30 meters (about 80 to 100 feet), Soelistyo said.

Fernandes said the focus for now must remain on the recovery effort, and no sweeping changes were planned for the airline, which has 1,000 flights a day. "But rest assured," he said, that once the investigation is done, if "there are things we need to change, that we will change it."

The Airbus A320-200 lost contact with air traffic control early Sunday shortly after the pilot requested permission to turn and climb to a higher altitude because of bad weather, according to Indonesian officials.

Questions remain unanswered about why Flight 8501 lost contact with air traffic control and what happened afterward.

Some experts have said the aircraft might have experienced an aerodynamic stall because of a lack of speed or from flying at too sharp an angle to get enough lift.

Analysts have also suggested that the pilots might not have been getting information from onboard systems about the plane's position or that rain or hail from thunderstorms in the area could have damaged the engines.

The key to understanding what happened is likely to be contained in the aircraft's flight recorders.

"Until we get the black boxes, we won't know what's going on with the engines," Bill Savage, a former pilot with 30 years of experience, told CNN.

'It was to be his last vacation with his family'

Details have emerged about some of the people on board the plane.

They include Alain Oktavianus Siauw, whose fiance says she was on her way to the airport to pick him up when she heard the plane had gone missing.

Louise Sidharta said Siauw was supposed to be enjoying a family vacation before the two got married. "It was to be his last vacation with his family," she said.

Siauw's Facebook page says he lives in Malang, a province in Indonesia.

The disappearance of Flight 8501 also stirred painful memories of the families of people on board Malaysia Airlines Flight 370, which dropped off radar over the South China Sea in March.

Nearly 10 months later, searchers are still combing remote reaches of the southern Indian Ocean for any trace of the Boeing 777 that had 239 people on board.

"The lack of ability to close things down emotionally is just exhausting," Sarah Bajc told CNN on Monday night. Her partner, Philip Woods, was on board Flight 370.

When news broke that another plane had disappeared this week, Bajc said, "I just started to shake."