Despite having to work, Bucks fans celebrate team win during parade 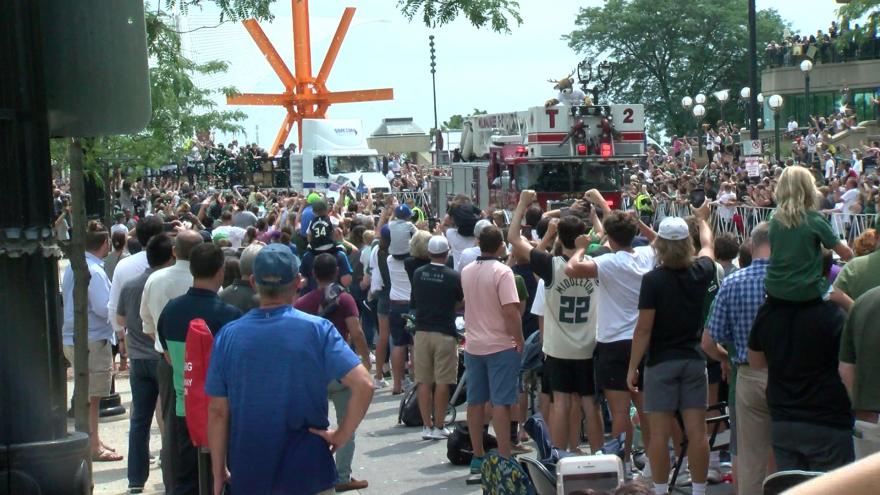 MILWAUKEE (CBS 58) -- Thousands of people filled the streets of downtown Milwaukee for the Bucks parade on Thursday, July 22.

Many of them took the day off work, but not everyone was so lucky.

CBS 58 talked with some of those people to see how they still tried to celebrate the team.

Even if they weren't in the crowd on Wisconsin Ave., those who had to stay inside say their love for the Bucks goes far beyond any work shift.

Jill Ruffing was a little bummed about it but, for her, others come first.

"It is so exciting for our city but yes I wish I was outside with everybody but I'm glad that we are here to help the customers that are here," said Ruffin, general manager of the 600 East Café Business Center.

Inside the café, her windows, at least, offered a view.

Fred was doing security... outside.

While there, CBS 58 met a group of colleagues from Northwestern Mutual.

They were able to take turns guarding their spot at the gate.

"So I came out at 6 a.m. and we're able to switch and go back in for a little bit, work on stuff, come back out," said Morgan Bandkowski, who works at Northwestern Mutual.

"Oh my gosh, I'm so excited. This is like a once in a lifetime opportunity," said coworker Miranda Joslin.

The celebration was so festive, other employees from across the street, came down from their office on the 33rd floor.

"You gotta take advantage of it when it's here, you only live once, right?" said Marie Millard, an accountant at Baker Tilly.

And after the parade passed through, everyone went back to work knowing that, in some way, they witnessed history.