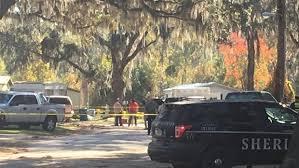 A news release from the U.S. Marshals Service says the suspect was killed by officers who returned fire. The release says the deputy marshal, 53-year-old Patrick Carothers, was shot twice while trying to serve a warrant at a mobile home in rural Long County, about 55 miles southeast of Savannah.

The fugitive, Dontrell Montese Carter, was wanted on charges of attempted murder of police officers, domestic violence and unlawfully discharging a weapon stemming from a September incident, reports CBS affiliate WTOC. Carter was reportedly struck multiple times in a gunfight with officers Friday and was later pronounced dead at a hospital.

Carothers, a 26-year veteran of the U.S. Marshals Service, served as deputy commander of the Southeast Regional Fugitive Task Force for more than a year, the station reports.

In a statement, U.S. Marshals Service Deputy Director David Harlow said Carothers was married and had five children. He called Carothers a hero and described Carter as “extremely dangerous.”