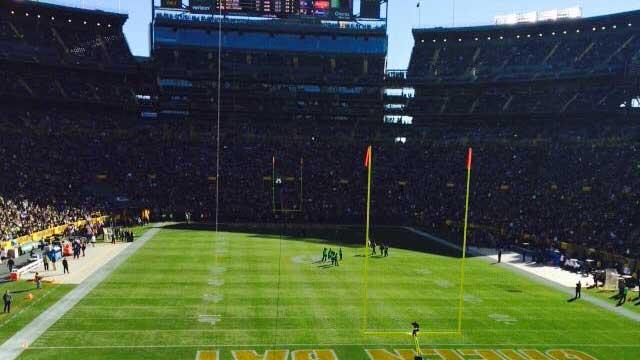 The Green Bay Packers, University of Wisconsin Badgers and Milwaukee Brewers along with numerous other professional and collegiate teams received payments for patriotic displays, according to a report called "Tackling Paid Patriotism."

The report was created by Senator John McCain and Senator Jeff Flake.

"Americans deserve the ability to assume that tributes for our men and women in military uniform are genuine displays of national pride, which many are, rather than taxpayer-funded DOD marketing gimmicks," said Senator McCain and Senator Flake in a statement.

Department of Defense spent $10.4 million on marketing and advertising contacts with professional sports teams between 2012 and 2015.

DOD maintains all its spending on sports marketing and advertising with professional sports organizations is integral to recruiting efforts.

"Although DOD has indicated the purpose of these contracts is to support recruiting, the Department doesn't uniformly measure how and whether the activities under contract are actually contributing to recruiting," said Senator McCain and Senator Flake in a statement.

The Green Bay Packers were paid $200,000 for paid patriotism and perks, according to the report. This included the opportunity to perform pregame on-field activity and ceremony. One pregame MVP party deck package for 200 Wisconsin Army National Guard (WIARNG) soldiers and their families that included food, beverages, a gift. One co-branded promotion item. On-field halftime entertainment with TundraVision video board coordination.

Roger Goodell, NFL Commissioner, sent a letter to the Senators on November 2 in regards to this report.

"We are conducting an audit of all contracts between our clubs and the military service branches or state National Guard Units. If we find that inappropriate payments were made, they will be refunded in full," Goodell said.

The Milwaukee Brewers were paid $80,000 for paid patriotism, according to the report. This contract included $49,000 for WIARNG to sponsor each Sunday performance of "God Bless America" during Brewers home game with announcement and logo recognition on the video board. A promotion to recognize soldiers and their families and provide 12 vendor passes during each of four Brewers home games cost $10,000. The DOD paid $7,500 for 12 field-access passes for WIARNG members to perform an on-field award presentation and throw out the ceremonial first pitch before three Brewers home games, and a private suite rental for two of those games.