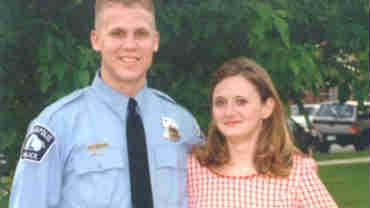 Denise Held never expected to be president of the group COPS or Concerns of Police Survivors.

Her boyfriend Dave Loeffler had survived a horrific injury on duty.

Losing his leg meant the end of his police career but he was still getting the bad guys as a prosecutor, until tragedy struck.

\"He had been on pain medication for 12 years,\" explained Held. \"He received a new medication and had a bad reaction. He was just gone. It was devastating.\"

After years of grief, involvement with COPS, in particular its camp for children who have lost their police fathers or mothers, helped temper her anger.

\"Every time I have the opportunity to be with another law enforcement survivor, something magical happens. A little bit of healing takes place every time.\"

Now the bagpipes are no longer only a sound for mourning. In fact Sunday, March 1st they will be a source of pride when the Emerald Society holds its annual fundraiser at the newly renovated Irish Cultural and Heritage Center at 2133 W. Wisconsin Avenue in Milwaukee.

The group which is made up of Irish descendants in law enforcement will commit the proceeds to COPS and also Shielded Hearts, another local outreach group that was instrumental in helping the Oak Creek Police Department after the Sikh Temple shooting.

\"We've never had to deal with Concerns of Police Survivors or have someone die in the line of duty in Oak Creek,\" said Emerald Society President Gary Schneider. \"However, we did need Shielded Hearts to support us in August of 2012. So this is a way of paying it forward.\"

Held feels the same way only as part of a legacy to her beloved.

\"My goal is to make the world a better place because he can't anymore.\"

THE EMERALD SOCIETY FUNDRAISER STARTS AT NOON AND RUNS UNTIL 6 P.M.

AT THE IRISH CULTURAL AND HERITAGE CENTER