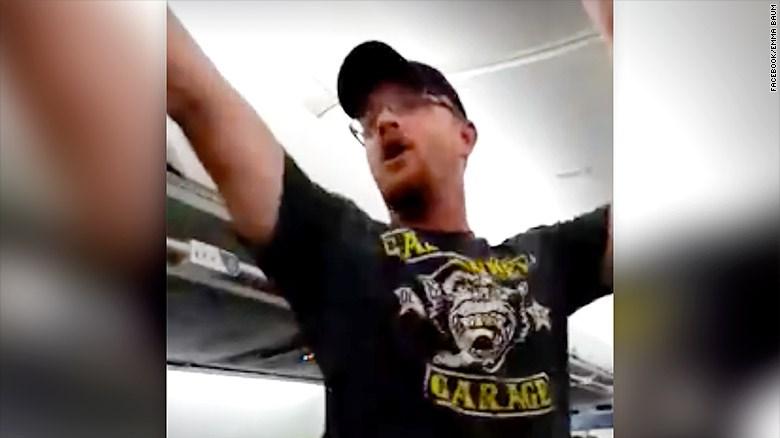 (CNN) -- Delta Air Lines has apologized for failing to eject a Donald Trump supporter from one of its flights after he yelled at other passengers, calling some of the women on the plane "Hillary b - - - - - s."

The airline says he'll never be allowed to fly Delta again, and that it's refunding every passenger on that flight the full price of their tickets.

The unnamed passenger was on a flight from Atlanta headed to Allentown, PA, last Tuesday night when he was captured on a video that has since gone viral. More than 2.2 million have viewed it since it was posted on Facebook.

"Donald Trump, baby," he shouts while standing in the aisle, clapping his hands above his head.

"Donald Trump is your president, every God damn one of you," he says at the end of the 45-second video. "If you don't like it, too bad."

Delta CEO Ed Bastian sent a letter to Delta employees Monday saying that the airline made a mistake by allowing the abusive passenger to remain on the flight.

"This individual displayed behavior that was loud, rude and disrespectful to his fellow customers," he wrote. "After questioning the customer, our team members made the best decision they could given the information they had and allowed him to remain on the flight. However, if our colleagues had witnessed firsthand what was shown in the video, there is no question they would have removed him from the aircraft. He will never again be allowed on a Delta plane."

Bastian said it is important that the airline admit its mistakes when one is made.

"The heightened tension in our society means that now more than ever we must require civility on our planes and in our facilities," he said. "We must stay true to Delta's core values and treat one another with dignity and respect. We also must remain committed more than ever to the safety of our customers and our crew members. We will not tolerate anything less."