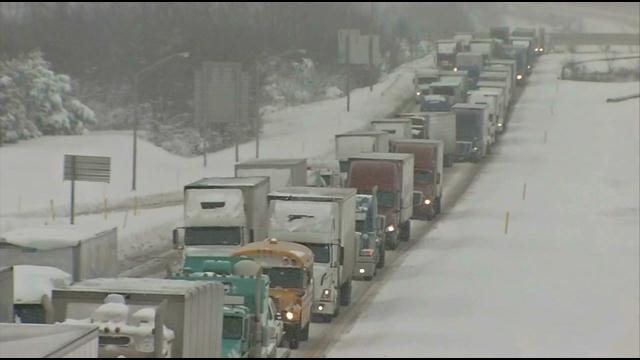 Traffic on Interstate 65 in Elizabethown, Kentucky was brought to a standstill Thursday morning and a local truck driver was in the middle of it all.

Delavan trucker Wayne Holden was on his way to Knoxville when he got stuck in a sea of stopped or stalled cars.

The area got hit with 21 inches of snow within 15 hours.

Even after the snow stopped, State Police say even major roads like the interstate remained impassable.

\"The way I understand it, there were vehicles running out of fuel, people stranded, and poor planning on people's part going out in the weather,\" Holden told CBS 58 News by phone. \"There are multiple vehicles in ditches, trucks, cars, all up and down this road.\"

There were also reports that the snow started piling up around stalled cars making it impossible for folks to get out.

The National Guard was called in and to assist in getting drivers on their way, including civil rights activist Jesse Jackson who tweeted out a picture of being stuck.

Two road side shelters were set up to assist the weary.

A similar situation happened along Interstate 24 in Paducah.

By 4 p.m. many of the vehicles were rolling once again.

The governor says there were no reports of deaths or major injuries.