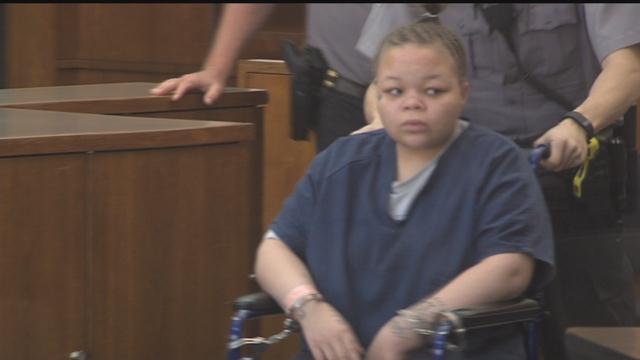 A real courtroom battle is brewing over whether a woman is competent to stand trial for killing two men in a crash.

Jasmine Ray was accused of speeding through a light in a stolen car late last year.

One doctor who did a psychological review said she's fit to stand trial.

But her defense is arguing against it and has requested a competency hearing.

Jasmine Ray has been charged with two counts of second degree reckless homicide and hit and run resulting in death.
Police said in January they stopped a car just down the street when it sped off and hit two middle age men and killed them. Police stopped that stolen KIA just north of Burleigh on Sherman after they recognized the stolen KIA reported missing earlier this morning. Two women were driving that stolen car, a 21 and 22-year-old.
Police said they sped away and plowed into a Malibu, killing 57-year-old Terry Jackson and 59-year-old Darrell Thompson.
Witnesses said firefighters had to pull the male victims from the car, and a woman was praying over the men. It didn't look like they were alive after the accident. Witnesses also said one of the women in the stolen KIA were injured and on the side of the road.
Ray was taken to Froedtert Hospital after having an injury consistent with striking steering wheel and had a shattered ankle.
Ray initially indicated that someone else was driving the car but upon learning the two individuals had died she admitted to driving. She said she was going 75 - 80 MPH at the time of the crash.
She said she initially lied about what happened because she was too young to go to jail for murder.
She told police she had never obtained a driver’s license.
Share this article: