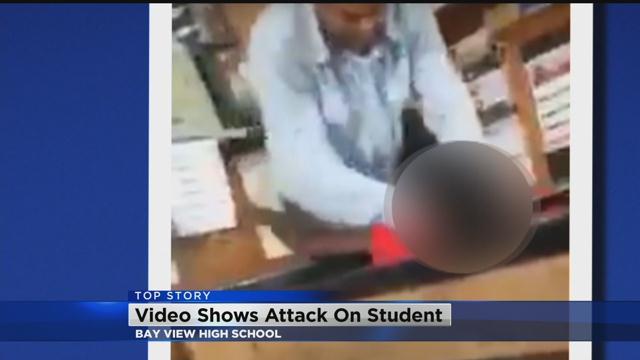 A teachers aide at Bay View High School has been arrested following an incident captured on video inside a classroom Wednesday morning.

Video shows the 39-year-old staff member pushing a 14-year-old onto a desk, then holding him by his neck and pushing him to the floor.

Police say the staff member was arrested for physical abuse of a child.

CBS58 spoke with a 14-year-old who was inside the classroom when it happened.

"[The student] was talking stuff and then the teacher came, slammed him on the chair, and started choking him saying you don't know who you're [expletive] messing with."

Parents were surprised to see the video.

"That was really scary watching the video," said Willie O'dell Jones. "I've never seen anything like that."

"He should have been marched out right away," said James Sinkey. "There's no need for actions like that, it's just too much."

Students say the teacher and 14-year-old have been arguing back and forth for quite some time. The video does not show the moments leading up to the altercation, but classmates say the student was being "disrespectful" to the teachers aide.

"This teacher's just bogus," said one student. "But then again, the kid shouldn't have been talking stuff."

The student was treated at a local hospital for minor injuries.

The investigation is ongoing and when it is complete the case will be presented to the Milwaukee County District Attorney’s office.

Milwaukee Public School District released this statement about the incident:

MPS finds this incident deeply disturbing. As soon as the school administration was notified of the incident, the Milwaukee Police Department was contacted and the staff member was removed from the classroom. We are cooperating with MPD. This staff member – who is a paraprofessional (teacher aide) – faces disciplinary action, including termination.