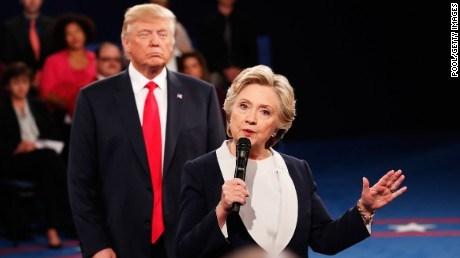 "He's decreasing stress by doing all that movement," Driver said of Trump's behavior on CNN's "New Day" on Monday.
But Driver also called Trump's movements a "pre-assault indicator."
"At some parts of watching last night, I was really getting nervous because she was in his space," she told CNN's Alisyn Camerota. "He's like a dog who's starting to get anxious and being backed into a corner."
While the candidates stood at podiums for last month's first debate, the town hall-style debate allowed Trump and Clinton more freedom of movement because the stage was largely empty besides two chairs and two side tables.
Driver also called the Democratic nominee's decision to stand in front of Trump while she was talking "strategic." She compared Clinton's movements to a schoolteacher who stands next to whispering children to make them stop talking.
"Did Trump interrupt at all when she was standing in front of him?" Driver said. "Not once."
Driver also said Clinton "snubbed" Trump at the beginning of the debate by not shaking his hand. But when the candidates did shake hands at the end of the event, Driver said Trump moved to take control.
"When he shook it, he then did that elbow grab," Driver said, "Like, 'I might be cowering down and shaking your hand and giving you power, but I'll talk a little power back with that elbow grab.''"
More mysterious was Trump's sniffing, a behavior the candidate can't seem to get rid of -- it captured the attention of viewers at the first debate, too.
"Last time, he said he didn't have a cold," Driver said. "I said, he probably should say he has a cold, because maybe he's just stressed throughout the whole entire debate, although he was way more prepared this time."
Share this article: