Deadly I-78 pileup: Dozens of vehicles collide on Pennsylvania highway 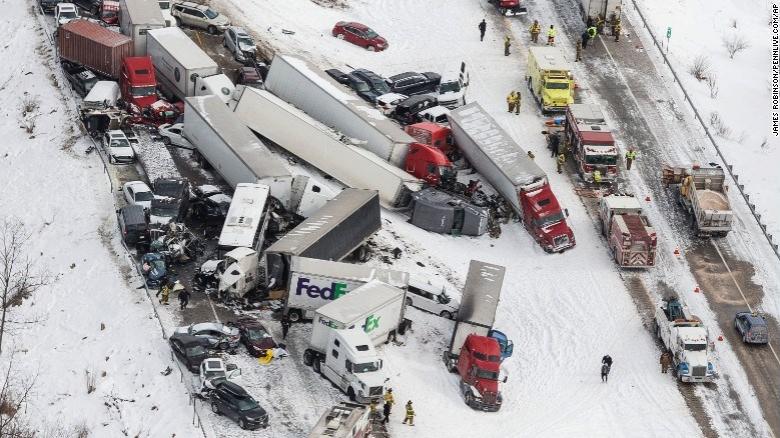 (CNN) At least three people were killed and scores were injured when dozens of vehicles slammed into each other on a stretch of Pennsylvania interstate in Lebanon County, officials said.

A driver involved told CNN the weather on Interstate 78 near Fredericksburg was a prime factor.

"It was definitely a whiteout, I couldn't see any further than probably two city blocks," Raoul Jardine of Allentown said. "I saw brake lights and pulled off to the side. Somebody hit me when I was parked in the shoulder."

"We are still in the process of looking for people in vehicles so I cannot say how many are dead yet," Pennsylvania State Police spokesman Trooper David Beohm said.

At least 60 vehicles were involved in the series of wrecks.

"They were transported to 10 different hospitals in the area, some of them via medevac. There were four medevac units there," Wolgemuth said.

The accident happened at 9:30 a.m. at mile marker 7.5 and the interstate is shut down in both directions, state police said.

"The highway remains closed and I'll be surprised if it's open any time before daybreak. It's just a tangled mess of trucks," said Wolgemuth.

Beohm confirmed a snow squall created whiteout conditions at the time of the wrecks.

Jardine said it took him 10 to 15 minutes to compose himself.

"I got out of my car and couldn't believe what I was seeing," he said. "It was carnage."