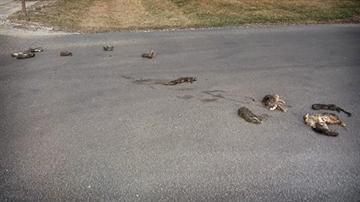 HALES CORNERS - A strange thing keeps happening outside the studios of a local radio station every April for the last four or five years. Someone tosses about a dozen dead squirrels and rabbits on the driveway of 1250 WSSP, a sports talk radio station in Hales Corners.

It always happens during the Cutting Edge Outdoors show aired on the AM station from 6:00 a.m. to 8:00 a.m. on Saturdays. The last occurrence was on April 12th. Eight squirrels, one with a zip tie around it's neck and two dead rabbits were thrown on the driveway of the station.

Some believe the dead animals are left outside the radio station in protest to the hunting and fishing show. This is the first time WSSP has reported this to police. Officials say this is an active investigation while they look at the surveillance tape of the incident. The suspect vehicle is described as a small silver SUV or pickup with a cap on it. Anyone with information is urged to contact Hales Corners Police.