David Bowie is Dead at 69 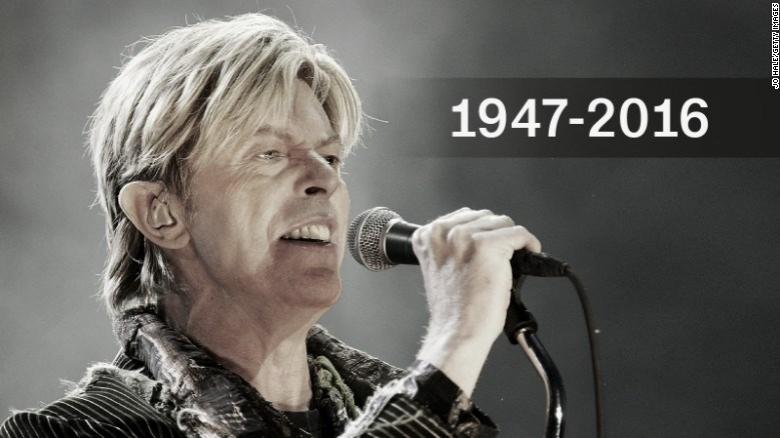 (CNN)David Bowie, whose ground-breaking sound and chameleon-like ability to reinvent himself made him a pop music fixture for more than four decades, has died. He was 69.

"David Bowie died peacefully today surrounded by his family after a courageous 18 month battle with cancer. While many of you will share in this loss, we ask that you respect the family's privacy during their time of grief," said a statement posted on his official social media accounts.

Neither his publicist nor the statement elaborated on what kind of cancer the singer was fighting.

Bowie's death has been the regular subject of internet hoaxes for the last several years. So the news came as a shock to fans and industry insiders when it was confirmed.From an unknown singer called David Jones from the south London suburbs through his "Ziggy Stardust" heyday to his transformation as a style icon, Bowie's married music and fashion in a way few artists have been able to master.

He had just released his latest album, 'Blackstar,' on Friday, his 69th birthday. It shot to no. 1 on the iTunes chart in the U.K. and no. 2 in the U.S., underscoring his appeal even after decades in the music business.

Like his past releases, the work -- generally praised by music critics -- defied genres. The influential music publication NME called it an amalgamation of "warped showtunes, skronking industrial rock, soulful balladeering, airy folk-pop, even hip-hop."That in a nutshell was Bowie: there wasn't a musical style he didn't dabble in - and indelibly leave his mark upon.

Since his breakthrough with 1972's 'The Rise and Fall of Ziggy Stardust and the Spiders from Mars," Bowie's reach was eclectic: glam rock, prog rock, pop rock, electronic rock.

And the results? Electric - to the tune of more than 130 million records sold.

He had his first No. 1 single in the United States with "Fame" in 1973 and followed that up with dozens of hits that still remain on heavy rotation on radio: "Let's Dance," "Space Oddity," "Under Pressure," "Rebel, rebel."

"David Bowie was one of my most important inspirations, so fearless, so creative, he gave us magic for a lifetime," tweeted rapper Kanye West, as news of his death made the rounds.Bowie began his musical life with his birth name Davy Jones, riding the mod wave of the mid-1960s. He changed to Bowie to avoid confusion with Davy Jones, the lead singer of the Monkees, which was enjoying serious pop success at the time.

He ushered in the 1970s as Ziggy Stardust, an androgynous space-alien-turned-rock-star. H

He always had impeccable timing.

He released his song about a doomed astronaut, "Space Oddity," just days before the 1969 Moon landing.

Four years later he killed off his most famous creation, the other-worldly "Ziggy Stardust," just at the point it threatened to overwhelm him.