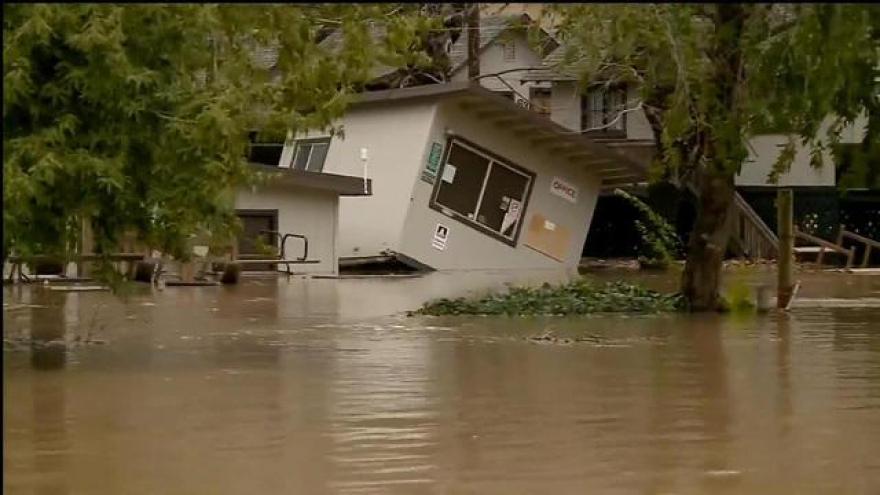 GUERNEVILLE, Calif. -- About 2,000 people in a rural California community near Sacramento were asked to leave their homes Tuesday as a river swollen by days of heavy rain threatened to flood, while north of San Francisco thousands more were urged to seek higher ground.

Emergency crews and officials worked through Tuesday to try to bolster the levee in Sacramento County along the Cosumnes River, before deciding to ask 2,000 residents of Wilton to voluntarily evacuate before dark. Sacramento County emergency services official Mary Jo Flynn said water was expected to spill over the levee before midnight, flooding low-lying roads and buildings with up to 1 foot of water.

An evacuation center will be opened Tuesday evening in neighboring Elk Grove but some residents said they plan to stay put.

“We have no concerns,” Lill Nichols, who with her husband runs a horse farm near the river, told the Sacramento Bee. “We have animals and can’t evacuate anyway.” In the city of Sacramento, workers wrenched open more than a half-dozen century-old spill gates on the state’s biggest river, the Sacramento, to ease pressure on the swollen river and on levees there. California is in a six-year drought, and the last time state workers needed to open the gates was December 2005.

In Marin County, rain gauges showed heavy downpours across the Corte Madera watershed while rapidly rising water levels surpassed the monitor stage and were approaching flood stage, according the the weather service.

Some 3,000 Sonoma County residents remained under an evacuation order as the Russian River rose again under pounding rain. Officials red-tagged seven homes, ordering residents out, when a rain-soaked embankment came crashing down.

Johna Peterson was one of few residents who ventured out in the remote Sonoma County town of Monte Rio. Walking on the bridge across the Russian River, Peterson worried about what the coming hours and days would bring.

“I think it’s going to go higher,” Peterson said. “There’s nowhere for this water to go.”

In nearby Forestville, Kathy Granados huddled with two other people under an awning at the River Bend RV Park, watching the downpour.

“We’re waiting it out,” she said. “Yesterday the water dropped, but it’s going to get higher. We’re just sitting here. We have no electricity, no heat.” Tuesday’s storm was the latest of back-to-back systems -- buffered by a brief respite Monday -- that have brought the heaviest rain in a decade to parts of Northern California and Nevada.

The storms are part of an “atmospheric river” weather phenomenon that draws precipitation from the Pacific Ocean as far west as Hawaii. Its impact can be catastrophic.

A blizzard warning was in effect for parts of the Sierra Nevada, the first issued in the past nine years, said Scott McGuire, a forecaster for the National Weather Service based in Reno, Nevada.

“This is definitely a dangerous, life-threatening situation going on up there,” he said. “People should not attempt to travel at all.”

Forecasters warned of up to 10 feet of snow in the highest mountains, with up to 7 feet of snow around the resorts of Lake Tahoe, high risk of avalanches, and wind gusts to 60 mph. The Sierra ridge had gusts of more than 100 mph.

Many ski resorts shut down Tuesday because of the storm. A number of main roads in the Sierra were closed, including Interstate 80, or required chains.

Nearly 3 feet of new snow already was reported Tuesday morning at the top of the Mount Rose ski resort between Reno and Lake Tahoe. A series of storms already has added 33 billion gallons of water to Lake Tahoe since Jan. 1.