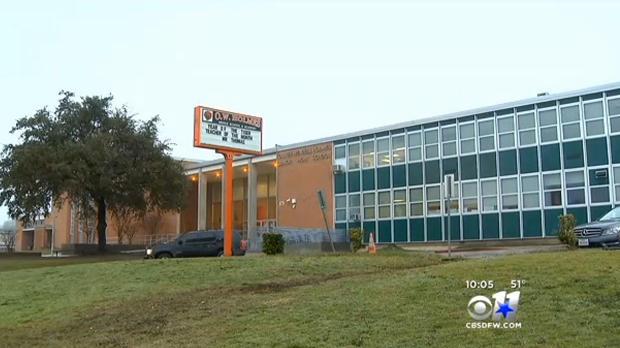 (CBS NEWS) A Texas teacher is on administrative leave after delivering a profanity-laced lecture to a sixth grade glass.

As CBS Dallas reported, a 12-year-old student at Holmes Middle School recorded the nearly seven-minute long tirade Monday by hiding her cell phone under a desk.

After school, the student played it for her mother, Diana, who asked CBS Dallas not to use her last name.

\"The most disturbing part was the end of the video, where he talks about his private parts,\" she said.

Students laughed as the teacher continued.

\"I don't know if they were laughing because they were nervous or uncomfortable, because some kids do that, but I didn't think it was funny at all,\" said Diana.

Diana says she took the recording to the principal the next morning, but wasn't satisfied with the reaction.

\"She asked me to delete the video, not to have the video in my phone, not to do nothing with it,\" said Diana. \"I didn't delete it. I told her I wasn't going to.\"

Diana wants the teacher to be fired.

The Dallas Independent School District issued a statement to CBS Dallas about the incident and the teacher.

\"It has come to our attention that one of our teachers may have spoken to students using inappropriate language, tone and behavior during a class recently,\" the statement read. \"That staff member has been placed on administrative leave.\"

When CBS Dallas asked if the incident was being investigated, the school district refused to comment.