Czech Zoo Saws Horns off Rhinos to Ward off Poachers 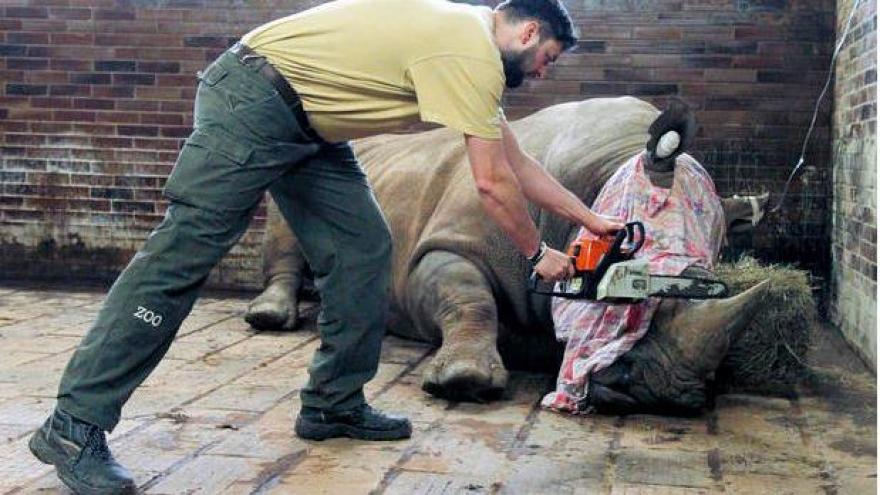 (CBS) PRAGUE -- A Czech zoo is taking no chances after the recent killing of a rhinoceros at a wildlife park near Paris by assailants who stole the animal’s horn -- the zoo has started to remove the horns from its 21 rhinos as a precaution.

With rhino horns considered a cure in Asia for everything from cancer, colds and fevers to high blood pressure, hangovers, impotence and other ailments, poachers have decimated rhino populations in Africa and elsewhere.

The attack at the Thoiry Zoo earlier this month was a warning sign for zookeepers around the globe that poaching could be spreading beyond the killing fields of Africa and Asia.

The Dvur Kralove Zoo, 70 miles northeast of Prague, has four southern white rhinos and 17 black ones, the largest group of its kind in Europe. Director Premysl Rabas said Tuesday that it was a tough decision to saw off the horns.

“However, the risk that the rhinos currently face not only in the wild but even in zoos is too high. The safety of the animals is our first concern,” he said. “A dehorned rhino is definitely a better option than a dead rhino.”

The zoo said the procedure is painless for the animals and has been used before for safety reasons, especially when the rhinos are moved to other places.

“There is no live tissue (in the horn),” said Jan Stejskal, director of communications and international projects at Dvur Kralove. “It’s just compact matter, similar to nails or to hair. If you cut it, it’s like cutting your hair or your nails. So it has no impact on the life of the animal.”

Palmir, a 10-year-old male rhino, was the first to have his horn cut off on Monday. It will grow back again.

“Pamir was anaesthetized. The intervention took less than one hour and it was performed without any complications,” said Jiri Hruby, a rhino curator.

The horns will be initially stored in a “safe place” outside the park.

The Czech zoo is not the only one to take such measures. It said its experts helped the Bandia reserve in Senegal do the same with their rhinos last week and says the Pairi Daiza Zoo in Belgium plans to follow suit.