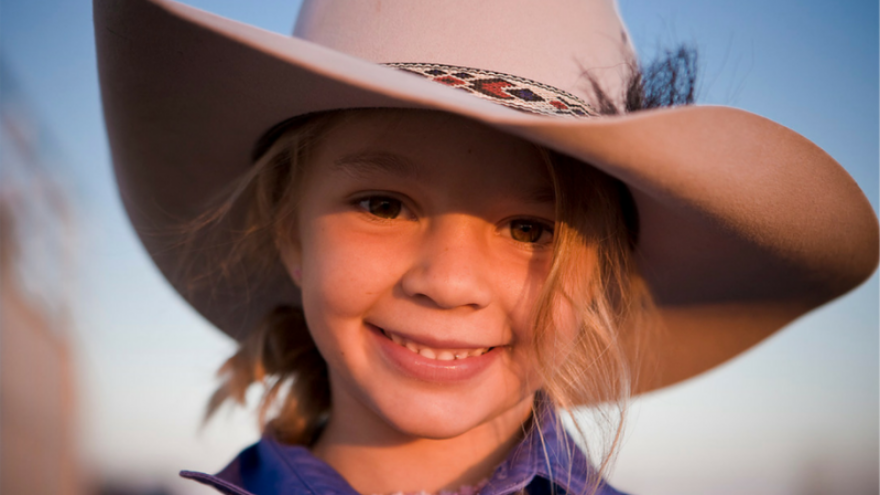 CANBERRA, Australia -- A 14-year-old girl who was the angelic face of an iconic Australian bushmen's hat brand was remembered by hundreds of mourners Friday after her suicide focused attention on the dangers of cyberbullying.

The memorial service for Amy "Dolly" Everett was held in the tiny Northern Territory town of Katherine near her family's cattle ranch. Most mourners dressed in her favorite color, blue, and many had driven hundreds of miles from distant ranches.

A photograph of a young Dolly, her smiling face framed by sun-kissed curls and shaded by a rabbit-felt hat, has been featured in advertising of Akubra Hats since 2009, most recently this past Christmas.

More than a century old and one of Australia's most iconic brands, Akubra has made so-called bush hats, the Australian military slouch hats and even the fedora worn by Harrison Ford's character Indiana Jones in the 1981 movie "Raiders of the Lost Ark."

Her family has blamed recent online bullying after Dolly's death last week but hasn't given specifics of the bullying or her cause of death. The tragic news travelled quickly via social media from the remote and sparsely populated cattle country of Australia's rugged far north.

"We are shocked and distressed to hear of the passing of 'Dolly'," Akubra said in a statement.

Stating that she chose to end her life to escape being bullied, the company said, "To think that anyone could feel so overwhelmed and that suicide was their only option is unfathomable.

Akubra, based in Kempsey, New South Wales state, has used the endearing Outback cowgirl image frequently in its marketing since it was taken at the remote Brunette Downs Station cattle ranch.

After the service, mourners released balloons and butterflies.

Her father, Tick Everett, flanked by his wife Meg and daughter Meg, urged parents to speak to their children about their relationships and bullying.

"Speak even if your voice shakes," he said, quoting a caption of a sketch of a dancer that Dolly had recently drawn. "Stop bullying and be kind and do it for Dolly," he added.

The debate about the perils to children of online communication caught the attention of Prime Minister Malcolm Turnbull.

"From pain and loss, we must renew our commitment to say no to bullying," Turnbull wrote in a Facebook comment.

The government had established an eSafety Commissioner to tackle cyberbullying and to work with internet companies to promote online safety, Turnbull said.

The opposition Labor Party's last prime minister, Kevin Rudd, tweeted, "Any form of bullying is an assault on our values. And in this young girl's life with lethal effect."

Northern Territory police say they are investigating the bullying allegations on behalf of a state coroner who will report on the cause of Dolly's death. But no criminal investigation is underway. Coroners can recommend criminal charges at the end of an investigation into an unexpected death.