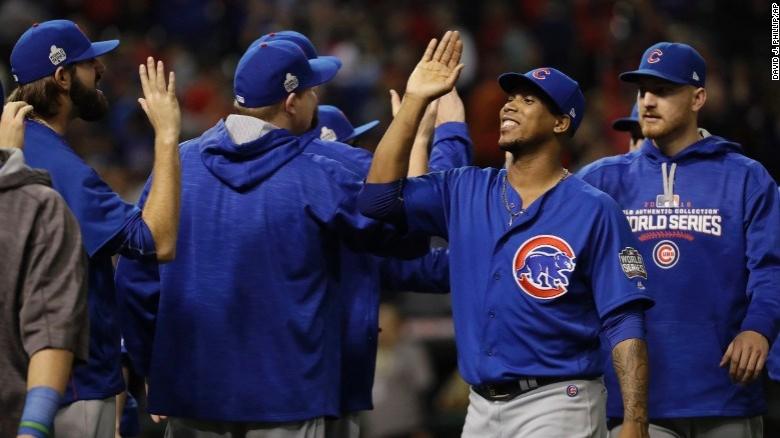 (CNN)What's one more day of suffering? Both the Chicago Cubs and Cleveland Indians' fan bases have waited so long already.

The Cubs, powered in part by an Addison Russell grand slam and home runs from Kris Bryant and Anthony Rizzo, have forced a decisive Game 7, winning Game 6 at Progressive Field in Cleveland in a 9-3 blowout. They now have the chance to win the World Series for the first time in 108 years.

Cubs starter Jake Arrieta got his second win of the series. He went 5 2/3 innings, giving up two runs on three hits, walking three and striking out nine. The only damage done on his watch was a fourth-inning Mike Napoli RBI single, driving in Jason Kipnis, as well as by a Kipnis solo home run in the fifth."Jake was really good," Cubs manager Joe Maddon said. "On his regular rest he was outstanding. We came out hitting the baseball. We looked more normal. We hit our home runs."

Game 7 is Wednesday in Cleveland, with first pitch scheduled for 8:08 p.m. ET. Starting for the Indians will be Corey Kluber, who will try to win his third game this series. He'll face Chicago's Kyle Hendricks, who had a no decision in Game 3.The Cubs haven't won a World Series since 1908, the longest drought in baseball. The Indians currently have the second-longest dry spell, last winning in 1948. The 174 combined seasons between titles for the two clubs is the most in World Series history.

By the end of Wednesday night, one city will feel pure euphoria. For the other, the misery will continue.

"I'm going to go out on a limb and say it's a really important game tomorrow," Indians manager Terry Francona said. "And we'll be really excited to play. You learn from your mistakes and then move on quickly, and we'll do that.

"It will be exciting to come to the ballpark tomorrow. Shoot, I might just wear my uniform home. I might get ice cream on it though, so maybe I better not."Cleveland starting pitcher Josh Tomlin, who had last pitched in Game 3 and was coming off just three days' rest, got rocked early by the heart of the Cubs' lineup.

In the top of the first inning, Bryant homered to left for the first run of the game. It was his second consecutive game with a homer and would finish Tuesday night 4-for-5.

The next batter, Rizzo, singled. A Ben Zobrist single advanced Rizzo to third.And then, a defensive nightmare for Cleveland. Russell hit a shallow fly ball to right-center field that looked playable, but it dropped between center fielder Tyler Naquin and right fielder Lonnie Chisenhall for a double. Rizzo and Zobrist scored, while a Kipnis throwing error sent Russell to third. That made it 3-0.

"Lonnie went hard after it, as he should, but it's Naquin's ball," Francona said. "He was playing on that side, and he's the center fielder. And I think at the end there, as Lonnie was kind of pulling off, Naquin was yelling, 'It's yours. You got it.' It's pretty loud anyway. I think we kind of told Nake especially playing on that side, that's his ball. Just take charge and take it. Kind of made it hard on Lonnie because you've got to go hard until you hear something.

"That was an unfortunate play, because that we thought we were out of the inning with one, kind of regroup, and instead it's three and JT had to keep pitching."It didn't get any better for Tomlin in the third, as a walk to Kyle Schwarber and base hits from Rizzo and Zobrist loaded the bases.

Francona pulled his starter for Dan Otero, but the floodgates already had been opened. On a 2-0 count, Russell launched a 91 mph pitch from Otero to center field for a grand slam and a 7-0 lead.

At 22 years old, Russell is the second-youngest player to hit a grand slam in the World Series. Only Hall of Famer Mickey Mantle, who was two weeks shy of his 22nd birthday in 1953, did that at a younger age. Russell also tied the all-time record for RBIs in a single World Series game with six.

"That's pretty cool, you know," Russell said. "Tomorrow there is obviously an opportunity to break that record.

"We've been doing this all year, been breaking records, been putting in new history in history books, and you wouldn't even be able to tell that just from us group of guys. Everyone's so professional. Everyone gets along together. It's a great bunch of guys and they pick each other up."Tomlin lasted just 2 1/3 innings and was responsible for six runs. He allowed six hits, walked one and struck out none.

Rizzo went 3-for-5 with a two-run home run in the ninth. Zobrist went 2-for-4 and scored twice.