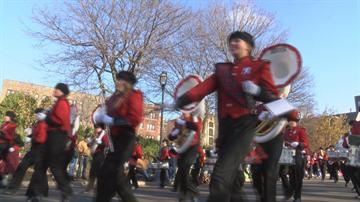 MILWAUKEE -- Despite whipping winds and temperatures in the teens at start time, thousands gathered to get into the Christmas spirit Saturday morning.

\"In Wisconsin, we can always handle the weather, you just have to be prepared,\" Kim Wall said.

Young or old, marching or taking it all in, the name of the game was staying warm at  the 87th annual Milwaukee Holiday parade.

Chris and Kelly Morgan's first date was at this parade more than ten years ago.  This year, they brought  their daughter for the first time, but not without some preparation.

\"We actually had to get bundled up by the car because it would've been too hot driving down here in the  car, so we got ready and it probably took about ten minutes to get her bundled up,\" Morgan said.

Pavlik and her husband drive up from Mount Pleasant every year.  They made sure to get their usual  position to see the Christmas favorites and some of the local celebrities.

\"Same spot, yep,\" Pavlik said.  \"Then we walk around, find a coffee shop open for breakfast and make a morning of  it.\"

Johnson Controls sponsored the parade for the 11th time.  They paired with the Hunger Task Force, asking people to bring non-perishables to donate while they enjoyed the show.

The mile-long parade weaved down Kilbourn Avenue and onto Old World Third Street.  Some of the crowd  admitted they considered watching on TV, but were glad they joined the thousands along the route.

\"We wouldn't miss it, it's one of the better parades we've ever seen,\" Pavlik said.

More than 100 attractions marched in this year's parade.