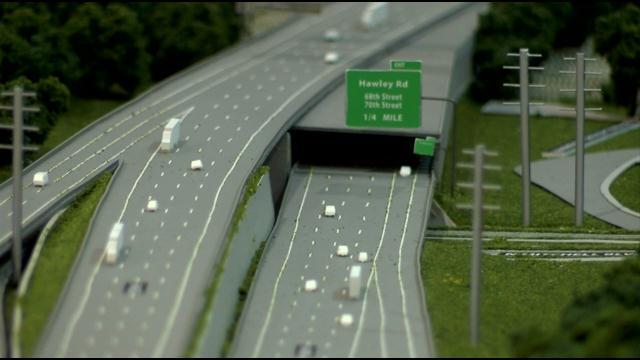 Hundreds filled the Tommy Thompson Youth Center to speak out about two competing options for the I-94 East-West Corridor design.

The Wisconsin Department of Transportation has two options on the table-- a double-decker section of freeway that would preserve the critical Hawley Road exit, or eight narrow lanes that would squeeze past Wood Cemetery.

Price tag for the double deck option, an estimated $1.1 billion. The skinny lane option would cost an estimated $825-million. Milwaukee Mayor Tom Barrett told the DOT why he supports skinny lanes-- \"you would save \"$1.8 million per foot,\" he said.

West Allis Mayor Dan Devine took the podium minutes later to throw his support behind the double deck option. \"We're in favor of the double-decker on the assumption that it's the only way to keep access at Hawley Road,\" Devine said.

Still other local politicians are throwing their weight behind \"none of the above.\"\"These hearings are essentially a sham,\" declared Milwaukee Alderman Robert Bauman, part of a coalition of local leaders headed by the Wisconsin Public Interest Research Project (WISPIRG) who want WisDOT to ditch their two favored options. WISPIRG's preferred option is to fix the pavement but add nothing to the design at an estimated cost of $350-million. Standing outside the public hearing, Ald. Bauman says his pleas for local control is falling on deaf ears. \"The Department of Transportation is pre-determined that they are going to propose to widen this expressway come hell or high water... at remarkable cost,\" Ald. Bauman said.

The public has another chance to be heard on Thursday, December 4, 2014, from 5 to 8 p.m., at Marquette University High School, 3401 W. Wisconsin Avenue (enter from Michigan Street parking lot).