Crews scrape concrete from Bluemound overpass after pieces break off 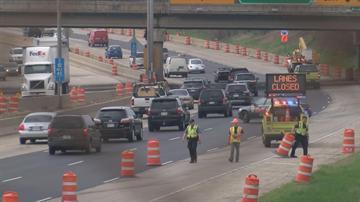 WAUWATOSA -- The Bluemound Road bridge is more than 50 years old and will soon be replaced.  But after concrete fell from the overpass Saturday afternoon, road crews plan to keep an even closer watch.

\"The structures here are all in need of being rebuilt and modernized,\" Wisconsin Department of Transportation Spokesman Mike Pyritz said.

\"It was not structural material we were concerned about that would require us to reduce traffic on that or close  lanes of traffic underneath,\" Pyritz said.

Monday morning, DOT crews were back, scraping any additional pieces of concrete that could fall  from the overpass.

\"The harsh winter that we had and the aging condition of some of the structures, we are seeing some situations that  we've been monitoring where we would want to be aggressive with that,\" Pyritz said.

Bridge inspection reports from 2012 recommend the Bluemound bridge be replaced and to \"continue to monitor for loose concrete\".  The bridge was already slated to be replaced this fall -- part of the zoo interchange project -- and Pyritz calls Saturday's incident a freak accident.

\"When they identify those and the terms that they use in those reports, it heightens the awareness, but it's still  not an imminent type of a situation,\" Pyritz said.

The DOT could decide to put netting under the Bluemound bridge to keep any more concrete from falling before it's torn down, but the DOT stressed the road is safe to drive on and under.

\"We will be certainly the ones that will worry the most about those situations,\" Pyritz said.  \"We will take proactive steps long before we would allow something to knowingly happen.\"

The bridge is on track to come down in October or November.  That's when Zoo Interchange work will shift to the \"core\" roads.