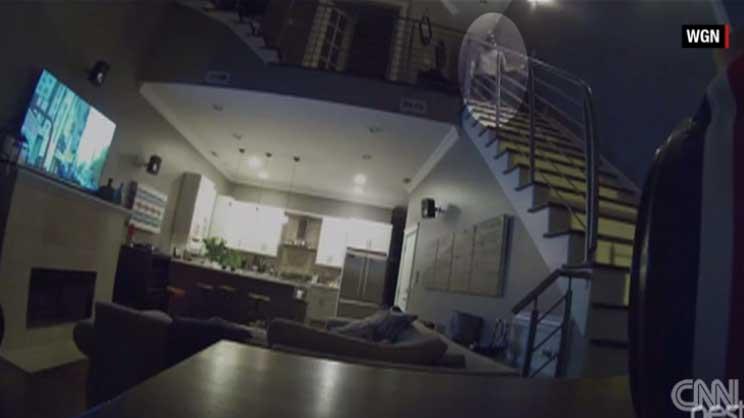 CHICAGO (WGN / CNN) Chicago residents in the Bucktown neighborhood are on the alert about a man who's broken into homes in the area, virtually undetected, even while the owners are at home.

One couple captured an image of the burglar actually watching them while they slept.

Police tell the couple they've never seen anything like this before.

It's a home invasion like you've never seen.  Jack Mackercher and his girlfriend Jordan Buranskas fell asleep on their couch in this Bucktown flat, they drifted off in the wee hours of Monday morning while doing laundry and while they were knocked out  this man creeped in.

"I like to think he was watching the TV and not us, it's slightly more comforting in the disgusting of circumstances,” said Jordan Buranskas, Home owner.

The intruder was captures on surveillance video the couple normally uses to monitor their two dogs when they're not home, only this time it captured this creepy intruder who seemed to be really into this movie as the couple slept down below.  He lingered for just under 15 minutes.

"I mean the guy definitely has some kind of issues right.first breaking into homes is never something you need to be doing, on top of that just kind of watching people is just strange,” said Buranksas.

The only reason this couple knew about the intruder is because Jordan couldn't locate her purse that day so jack decided to roll back the tape on the cameras to prove to jordan she had her purse earlier in the day.  That's when they stumbled on this footage reported around 3:30 Monday morning.

"if you look at the video - he's actually watching part of the show - he leaves when the credits start,” said Jack Mackercher/home owner.

"The creepiest part about all of this is we didn't' see someone breaking a home taking something and leaving we saw someone just lurking over us for 10 minutes while we slept, just watching us sleep,” said Jordan Buranskas, Home owner.

It didn't take long for them to determine Jordan's purse was stolen by this creepy intruder that didn't even disturb this couples two dogs, they believe he walked up several flights of the buildings back stairwell and entered through an unlocked sliding door that leads to the master bedroom.

“The fact that he would climb 6 flights of stairs, just to get up there that the off chance, to have to overcome all of these barriers, the off chance that it would be unlocked is probably the most disturbing part to me,” said Jordan Buranskas, Home owner.

The president of the bucktown community organization tells me he believes this same man was captured on video jiggling door handles just before jack and jordan's home saw this intruder.