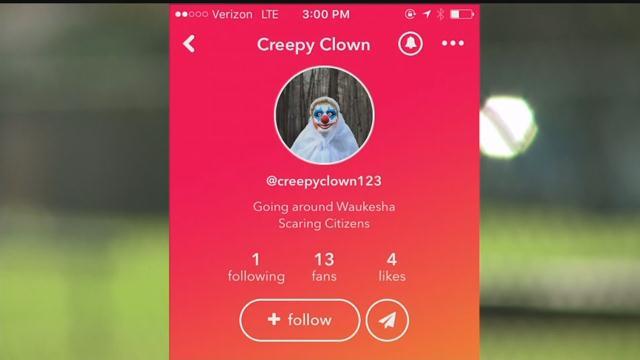 Allegedly a clown has been threatening elementary students in Waukesha through a smartphone app.

Police said the threat was not real so students have been at school today.

The app used is called musically.  It allows you to lip sing and make music videos.

But a creepy clown is making threats on the app. The clown is saying they will attack and murder students at the school.

Students at Hawthorne using the app got a threatening message from the clown.

The principal sent a message to parents today.

Dear Families,
I want to reach out to all of you today to fill you in on an incident that happened recently on an app
called musical.ly. This app has a messaging feature that allows students to send messages to each
other anonymously. It came to our attention that this app was being used to bully or frighten other
students. Several of our students received a message that mentioned threats to our school. At this
point a parent alerted building administration who then alerted district administration and the
Waukesha Police. Police responded immediately, conducted an investigation and determined that
the threat was not credible. However, we remained vigilant and continued to monitor student iPad
usage and building wide safety. The Waukesha Police Department and School District IT
Department are working to identify the source of these messages.
Since the initial incident, we have been in communication with the district regarding the removal of
this app from all student devices, which will take place this week. We want to stress that these
devices, while they are powerful tools for learning, also require monitoring by parents when the
devices come home every evening. Your support in reviewing your child’s online activity supports us
all in keeping our students safe.
The safety of your children is our top priority. If at any point we or the Waukesha Police Department
felt that there was a credible threat we would have immediately followed district and building
protocol and safety plans and sent a message home to parents. The purpose of this communication,
is to inform all Hawthorne families of the instance that occurred and to reassure the entire
Hawthorne STEM community that students are safe.
If you have any questions, at any point in time, please don’t hesitate to contact me.
Duy Nguyen
Principal Hawthorne STEM Elementary School

“They were saying I'm going to find you. I know where you live. Some girl called the police who is my friend. She said the clown said her full address,” said a 6th grader.

Police are working with the IT department to figure out who may have sent the message.

In the meantime, the school encourages parents to monitor what their children are doing online.

For month now, the creepy clown sightings have proven to be a menace for police departments across the country.

In recent months, a West Bend girl was arrested for making what was perceived as a threat on social media as a clown.

Sheboygan Police also picked up a man who was dressed as a clown and wandering a neighborhood with a knife.