Couple Starts GoFundMe Page for IVF after Struggle to Get Pregnant 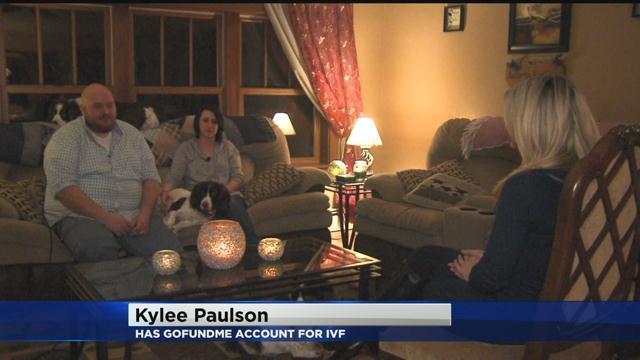 Kylee and Alex Paulson have faced hurdle after hurdle to have a child. Its not been a traditional journey to pregnancy and so the couple says they're now turning to IVF and a less than traditional method to pay for it.

"Once we got engaged, we started trying and then we got married. We bought the house," said Kylee Paulson.

They knew this journey wouldn't be easy. When Alex was child, he was diagnosed with Hodgkins-Lymphoma. Cancer.
His dad suffered from the same disease and was quick to ask doctors to freeze his son's sperm, knowing it might leave him sterile.
But the doctors decided against it.

" Is he going to be good, do we need to save anything or get any samples? And they were like no he's going to be fine, he hasn't
hit puberty yet," said Alex.

And after two years without success found out that was the wrong decision.

So they decided to try adoption.

"Someone I knew found out she was pregnant, she's 18, they decided we we're too young and asked it we were interested," said Kylee.

But then that fell through.

"Went to the agency, left the with paper work and talked to the people and then two weeks later she ended up losing it," said Kylee.

Left with no other option the couple is now looking into IVF which is not only costly, at up to 20-thousand dollars for the treatment, its also not
covered by insurance at all, even though this is all due to a medical condition.

Which is exactly why they've turned to crowd funding: starting a GoFundMe to raise enough money for IVF.

"We're not going to be able to afford it on our own. And we talked about that or adoption. Either one. But still adoption is expensive too," they said.

They say they've seen a wide range of comments on their struggle, thanks to the page, but are choosing to remain positive.

If you're interested in donating to the couple, here's a link to their GoFundMe page: https://www.gofundme.com/zcvaas

They say, if they don't raise the total $20,000, it doesn't matter. They'll take that money and keep adding to it each month until they have enough to go forward. And if they raise more than $20,000 they will donating the remaining portion to the MACC fund.