Couple moves forward after a car crashes into their Greenfield home 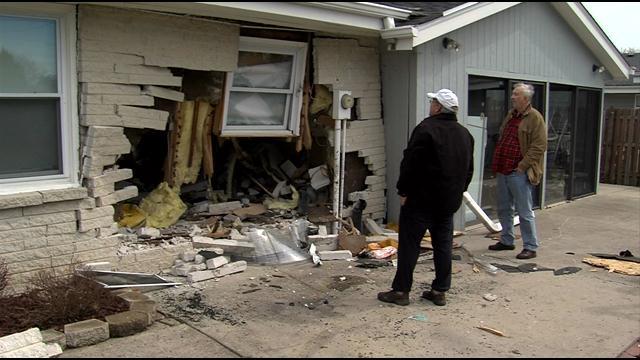 GREENFIELD-- Greenfield Police released a 911 call from a crash that sent an elderly couple to the hospital.

\"We need somebody here right away,\" said Wayne Liss to 911 dispatchers.

Dispatchers asked Liss if anyone was hurt.

According to a police report, 70-year old Ronald Janick was the man behind the wheel inside that car, his wife, Patricia Janick was in the passenger seat when the crash happened.

The couple suffered minor injuries.  They were treated at Froedert Hospital.

According to a police report, Patricia told officers Ronald was in a trance when he lost control of their vehicle.  Patricia said she kept trying to wake Ronald up, but he wasn't responsive as they crashed into a shed and eventually a home near South 124th and Holmes.

The Janick's SUV landed in Jim and Judy Walzacks' kitchen.  The Walzacks were on vacation in Florida at the time.

\"We have been extremely thankful and feeling very blessed that first of all, we weren't here when it happened, and that there was no explosion or fire, and that the people are okay,\" said Judy.

The Walzacks say insurance will cover the cost of the damage.

\"We've been married 51 years and we've survived a lot of things and we'll make it through this,\" said Judy.

Ronald Walzack declined an interview with CBS-58, but the police report says he did not have any pre-existing medical conditions that would cause him to black out behind the wheel.