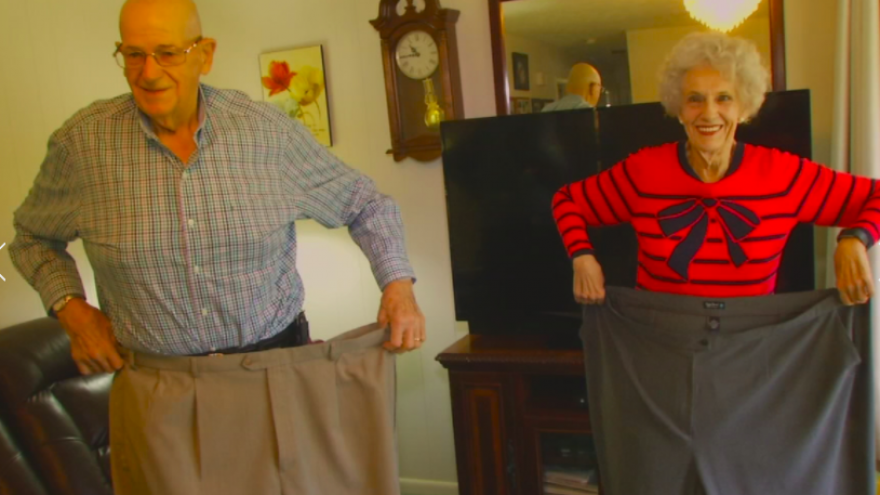 WEAVERVILLE, N.C. (WLOS VIA CNN) — It's that time of year when new year's resolutions are at the top of our minds.

And for many, the focus is on fitness.

A Weaverville couple is the ultimate example of how the buddy system can pay off big.

We've always heard once you get to a certain age, it's impossible to change your tune. Becky Hensley hopes her unconventional story shatters conventional wisdom.

She and her husband Donnie, both in their seventies, are now the picture of health.

The Hensley home is full of "before" pictures. They once weighed about 370 pounds each.

Becky says she could barely walk, and needed divine intervention.

"I was praying, and the Lord spoke to me, and said, 'Go find Donnie, and ask him to go to Weight Watchers with you.'"

Seven years later, they proudly show us the pants they used to wear. Donnie's lost 165 pounds, while Becky's lost 208 pounds.

"It hurts me when I see folks that are big like this. Because it's just been such a tremendous journey that God has blessed," Becky said.

"I can't imagine going back and being that big," adds Donnie.

The Hensleys helped each push each other.

They gained confidence as they shed the pounds by changing their diet and going to the gym for the first time.

"I still say scriptures when I'm walking," Becky said. "I am so thankful to be able to walk."

Oprah and Weight Watchers both took notice, featuring them online to motivate others.

"But the important thing is not what we've lost, it's what we've gained, and how we have learned how to keep it off," Becky said. "My husband and I have a much better lifestyle now. We have fun with different recipes. Also more fun smooching."

"We can do more. I used to not be able to bend over and tie my shoes. Now I have no problem whatsoever," said Donnie.

"Patience and persistence will pay off. Nobody is perfect, we're not perfect. Sometimes we go to parties and we may eat too much, we may eat things we shouldn't eat. Once and a while it doesn't hurt you," added his wife.

The Hensleys prove it's never too late in life to make a change.

Donnie's almost half the man he used to be, and Becky's not the same woman he married.

But their love story's as rich as ever.

The Hensleys are still hitting the gym and still go to Weight Watchers. Their goal now is to maintain the weight loss.