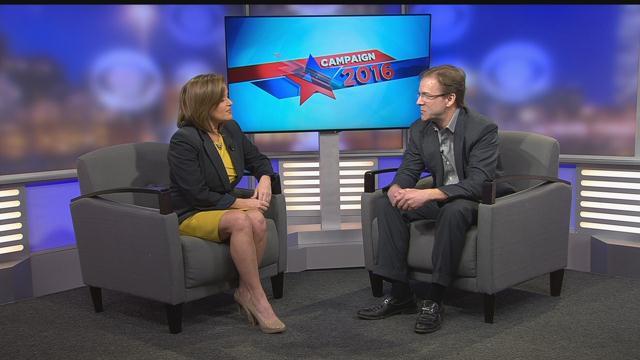 On the day before the election, Milwaukee County Executive Chris Abele told CBS 58 viewers to think about who can get things done.

"I encourage people to think about our ability, each of us, to get things done," Abele told Anchor Michele McCormack during a live interview on the CBS 58 News at 4 p.m.

The County Executive says the Show Dome, one of three of the Mitchell Park Domes shut down because of crumbling concrete, will be back open on May 1st.

"We will open all three," Abele added. "The first on May 1st. The other two, we think it will be six to eight weeks each, for the repairs. Hopefully, we'll have them all open for the summer."

Abele says its important for the public to understand what the county is up against when it comes to attendance and budget for the domes.

"In past years, attendance has hovered around 250,000 people per year. Years ago it was more like half a million. We're not even close to what it was years ago. The difference for me is that I think it's our job in a project involving your money to make sure there's meaningful public input. "

Abele's opponent, State Senator Chris Larson, has lashed out for what he calls misleading advertisements by the Abele campaign concerning Larson's support for a sales tax when he was a county supervisor.

"So that people coming from outside the county are paying in," explained Larson in his own live interview on CBS 58 News last week.

"That was a 1% percent sales tax eight years ago. My opponent is using the same crazy Scott Walker rhetoric that they ran when we passed it the first time. I'm confident neighbors understand we need dedicated funds to preserve our parks for the future."

Larson did not back of his use of the words weird and crazy when describing the campaign tactic.

"Have you seen his ads? He's simultaneously comparing me to with Bernie Sanders and Scott Walker. He's saying we're both too liberal and too conservative to make a good County Executive. He's throwing anything and everything at us."

Abele counters by saying the sales tax is regressive with no exemption for things like clothes of school supplies.

"Tell MPS parents we're going to pay more for winter coats," said Abele who points out the sales tax was approved before the worst recession in 7- years hit the country. Our jobs as executives is not to make decisions on how we would like the world to be, but how it is."