Cost of policing during summer festivals 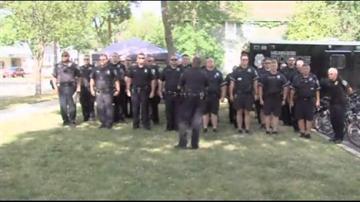 MILWAUKEE-Police Chief Ed Flynn talked with CBS 58 News about the other side of summer festival season; in particular, the cost and drain on his police force.

\"I spend hundreds of thousands of dollars protecting people who do not spend a nickel that goes to the tax base of Milwaukee,\" Flynn said. \"Our sales tax goes to the state.\"

The comments came during a broader discussion on ceasefire week, a community involved effort to get people to turns in their guns for cash in hopes of stemming the tide of gun violence in the city's most impoverished neighborhoods.

Chief Flynn says he would expand programs that are working but that budget strains are ever present and he doesn't see Milwaukee maximizing events that draw people from throughout the region.

\"I'm hemorrhaging overtime money all summer down here. The city derives no economic benefit from it. An awful lot of other cities would have a sales tax. A sales tax would support the police protection that people get who come here to the convention center, go the lakefront,  go to the ballgame, go to the Bradley Center. We don't get any of that.\"