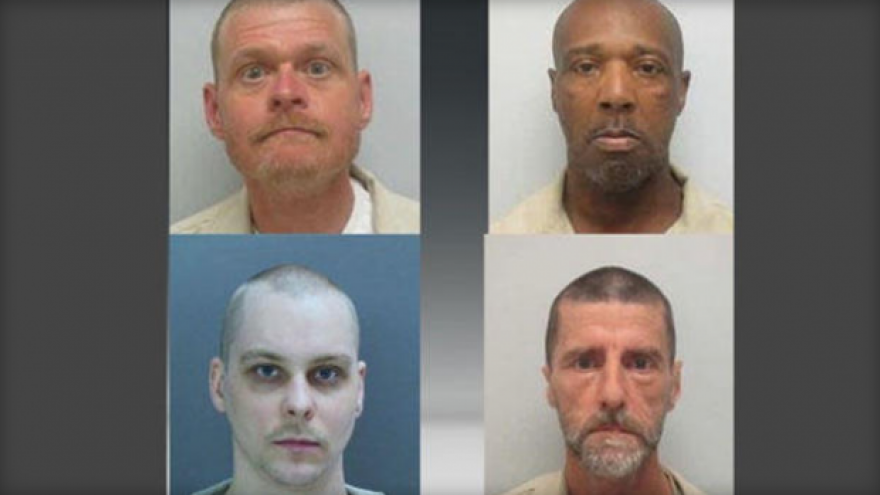 COLUMBIA, S.C. -- (CBS NEWS) Autopsies on four inmates found dead inside a cell in a South Carolina prison say they were all strangled and were killed within 30 minutes of each other.

Richland County Coroner Gary Watts said in a statement that 52-year-old John King was choked with an electrical cord on Friday morning at Kirkland Correction Intuition in Columbia.

Watts says the killers of 44-year-old William Scruggs strangled him while pressing on his chest, while 35-year-old Jason Kelley and 56-year-old Jimmy Hamm were also strangled.

Two inmates serving life sentences - each for killing a mother and her child - have been charged with four counts of murder in the killings. Prison officials say they are being held in the system’s highest security area.

Denver Simmons and Jacob Philip lured each of the four inmates into a cell at Kirkland Correctional Institution in Columbia on Friday morning, then worked together to attack and choke them, according to arrest warrants released early Saturday.

Two of the inmates were also beaten or stabbed with a broken broomstick, according to the warrants released by State Law Enforcement Division agents.

The warrants gave no reason for the attacks. They did say there is video of the killings and the men confessed to investigators.

Because of the ongoing investigation, Stirling would not talk about whether prison policies were broken or how the inmates came to be together.

Prison records show the four inmates killed were considered minimum security risks. The Kirkland prison serves several roles in South Carolina’s system. It operates a specialized housing unit for the state’s most dangerous inmates, an assessment and evaluation center for new inmates sentenced to more than three months, and a 24-bed infirmary, according to the Corrections website.

Simmons, 35, has been behind bars since his 2007 arrest on charges he killed a woman he knew in Colleton County, took her debit card and ate pizza for lunch, then got her 13-year-old son from school and killed him too.

Philip, 25, has been in prison since 2013. Authorities said he strangled his girlfriend and her 8-year-old daughter in Berkeley County.

Prison records show Simmons has three disciplinary infractions in four years for being out of place, disrespect and refusing to obey an order. Philip has no disciplinary actions against him in nearly two years in state prison.

Records did not show if the inmates had lawyers.

King was serving time for a variety of crimes and had a projected release date of October 2020. Kelley was serving 15 years for assault and battery of a high and aggravated nature. He was scheduled for release in August 2020.

Ham was scheduled for release this November after serving a sentence for a variety of offenses. Scruggs was sentenced to life in prison for murder and first-degree burglary.