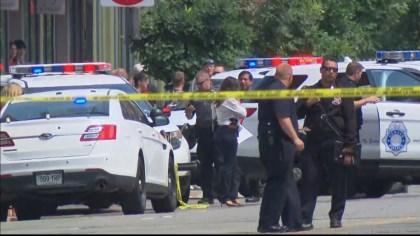 UPDATE:  DENVER -- Denver Police swarmed an area near an office building in the city's LoDo, or lower downtown, neighborhood Tuesday afternoon after they say a gunman shot a woman and then took his own life.

The incident was reported around 2:45 p.m., reports CBS Denver. Police tweeted at 3:17 p.m. that they were clearing the building, known as the Alliance Center. Around 3:40 p.m., they tweeted that the scene was secure.

Police say they believe the shooting was targeted and that the suspect and victim knew each other. One victim, a woman, suffered multiple gunshot wounds and was in critical condition. When police responded to the victim, they said the suspected gunman was already dead.

Jake Williams, executive director of Healthier Colorado, which has offices in the building, told Crimesider he was on the third floor of the building when he heard a woman screaming and felt a "rumbling" on the floor beneath him.

"I heard a sound I believe to be a gunshot and we could smell gunpowder," Williams said.

Williams said he believed the shooting happened on the second floor.

Williams said the building housed a number of nonprofits, many sustainability-focused. He estimated there were about 100 people in the building.

Video posted to Twitter by Erica Cano showed people running out of a building with their hands up.

ORIGINAL: DENVER (CBS4)– Shots were fired in the area of 15th and Wynkoop and victims were rushed to the hospital

after reports of a man with a gun shut down streets in Denver’s Lodo neighborhood on Tuesday afternoon.

Depot.
Victims were rushed to the hospital. It is unclear how many victims there are.
Officers rushed to the 1500 block of Wynkoop on reports of a male with a gun about 2:45 p.m.

Several streets in the area have been closed and will remain closed for what police said is an extended period of time. The public is urged to avoid the area.

were also on scene.

It is unclear whether the suspect has been detained or was among those hurt in the shooting.

All shuttles and bus service have been suspended in the area.