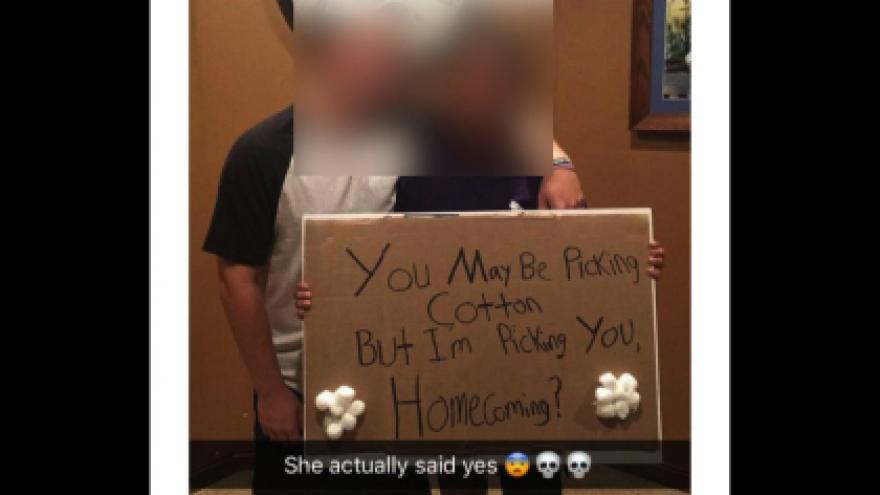 BURNSVILLE, Minn. (WCCO) — A controversial photo of two students in a homecoming proposal went viral recently, and some are calling it deeply disturbing.

This is a photo of a student asking another student to Homecoming. You can see the sign refers to picking cotton. We’ve blurred the teens’ faces.

In May, in Miami, a similar photo of a prom invitation went viral on Twitter.

Some say it was a joke between the pair. Others say it’s not funny at all.

Genesis Rivera is a senior at Burnsville High School.

“It’s gone around basically all Minnesota and people in other states are talking about it too, other schools,” Rivera said.

The Burnsville senior is right. Thousands of people have responded to the post that’s been shared more than a thousand times.

People around town are reacting. Hedr Olanda says, “When I show you this photo what do you think? It’s pretty offensive, I would be offended, yeah.”

“That’s a really messed up way to propose to people or whatever,” he said.

Several Burnsville students say they find the sign quite upsetting.

“People think they have the right to say what they want about different races but that’s not how it should be, racist comments or make racist jokes at all cause it’s just not right to anyone because people do get their feelings hurt,” Rivera said.

The principal released a statement saying, in part: “This incident is disappointing, to say the least, and directly conflicts with who we are.”

Here is the whole statement.

Some say it was a private joke between the pair that turned very public. Burnsville senior Dulce Espinoca says, “I don’t think we should see it as a joke.

“They were supposedly really good friends and he asked her in a different way, so they have two different stories and we don’t know the truth and I don’t think we’ll ever know the truth,” Rivera said.

The principal says they will have extra support on hand for students Monday. He is asking Burnsville parents to encourage their kids to seek out support to deal with their emotions regarding the post.