Controversial IVF Technique Produces a Baby Girl -- and for Some, That's a Problem 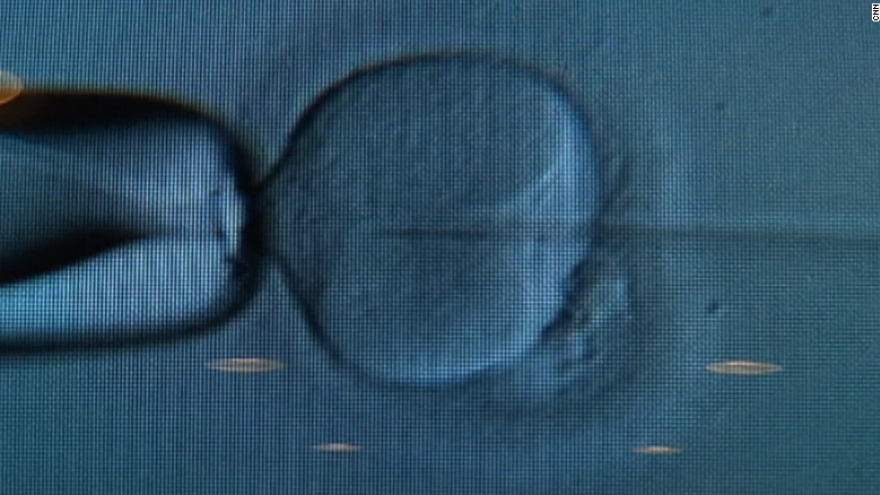 (CNN)--It was a first for the entire world: Using a controversial in vitro fertilization technique, doctors in Kiev, Ukraine, helped a previously infertile couple conceive and deliver a baby girl. Some critics say, for genetic reasons, the use of this IVF method should have been restricted to producing a baby boy.

The baby was born on January 5, the result of an experimental technique known as "pronuclear transfer" and sometimes referred to as three-parent IVF. The 34-year-old Ukrainian mother suffered from "unexplained infertility," according to Dr. Valery Zukin, director of the Nadiya Clinic for Reproductive Medicine, where the controversial pronuclear transfer technique was performed. She did not have mitochondrial disease.

That fact is significant to many observers.

The reason this experimental method is a cause for concern -- and was vigorously debated in the UK before approval -- is the genetic modifications produced in a girl baby could be passed onto her children, according to Lori P. Knowles, adjunct assistant professor at the University of Alberta School of Public Health.

Boy babies carrying donor mitochondria cannot pass their modified genetics onto any future children they may have because once a sperm fuses with an egg to form an embryo, the masculine mitochondrion withers and dies leaving the resulting embryo with only mitochondrion from the mother's egg.

"I do think it's highly significant that this is a girl because we know for sure that she will be passing on her mitochondrial DNA through her maternal line," said Knowles. If in the future this baby girl has genetic children, they will inherit her genetic modifications "and that's always been a really bright line," said Knowles -- a line not to be crossed until rigorous scientific testing proves it is safe.

Though Zukin "understood that it was better to transfer the male embryo," he explained how he came to use the technique to produce a girl.

In this particular case, the technique did not produce a "suitable male embryo," said Zukin, so, after consulting with the patient and receiving approval from a medical review board, the decision to go ahead with the female embryo was made.

"In Ukraine, the situation is very simple -- it's not forbidden," said Zukin. "We have not any regulation concerning this."

Knowles said "it is worth noting that he is vice president of the Ukraine Association for Reproductive Medicine" -- the medical review board that approved the procedure. She added that this is something "we try to be careful about over here."

"Safety is the main question," said Zukin. "We made a careful pre-implantation genetic diagnosis."

He explained that not only did his team do extensive genetic testing before fertilization occurred. And, once the patient became pregnant, they used amniocentesis -- testing the fetus' DNA -- to carefully monitor the baby for "all known diseases" and did not find any genetic problems. Zukin said they will continue to monitor the child for at least five years.

Overall, since the mitochondrion is only 37 genes -- the human genome contains an estimated total of 20,000 to 25,000 genes -- the danger of mitochondrial DNA from a donor is insignificant, said Zukin.

Though it is unusual that the infant carries DNA from three separate parents, other three-parent babies have previously been born using similar, though different, IVF methods.

In the late 1990s and early 2000s, doctors used cytoplasmic transfer to assist in the reproduction of about a dozen three-parent babies in the United States along with an unknown number in Europe. At that time, the Food and Drug Administration was not regulating this procedure, which involves transferring part of one woman's egg into another's as a way to help infertile women reproduce.

Once cytoplasmic transfer came to the attention of the FDA in the early 2000s, the US doctors performing this procedure stopped offering the service. However, on April 6, 2016, a US doctor used spindle nuclear transfer, an IVF innovation meant to tackle the specific problem of mitochondrial disease, to assist in the birth of a baby born in Mexico -- a location chosen to bypass American laws banning this experimental reproductive method.

Based on the assumption that the newborn baby's mitochondrial DNA is not defective, Dr. John Zhang, founder of the New Hope Fertility Center in New York, is not concerned about the possibility of future children inheriting this genetic modification.

"It doesn't really matter whether [future children] will inherit it in the future, since it is all normal mitochondrial DNA so theoretically there won't be any issues," said Zhang. He is the American doctor responsible for the Mexican born three-parent baby. He is a friend of Zukin, but did not assist in the procedure.

Though he believes Zukin's success gives infertile patients "more hope" for the future, Zhang still has criticisms of the work.

Zhang disapproved of the use of this technique for this particular patient.

In his own case, Zhang used a mitochondrial manipulation technique for a patient suffering from a disease; if you didn't replace the mitochondrial DNA, "the child will be sick," said Zhang. To use a controversial IVF technique in a young patient with an unknown fertility problem, "fundamentally, it's very different," he said.

Statistically, he said, the overwhelming majority of 34-year old patients will eventually get pregnant without using IVF.

Zhang also believes various underlying techniques used by Zukin's team were outdated, most especially Zukin's use of a virus protein to fuse the mitochondrial DNA into the host egg.

"We used an electronic system which is much cleaner," said Zhang. He explained that a virus will permanently integrate into the future baby's DNA, whereas electronic transfer leaves no lasting genetic mark.

"In animal research, people always try to not use a virus," said Zhang. In humans -- where less extensive experimentation has been done over the years -- the newer electronic technique is much more difficult to accomplish. He himself spent 20 years investigating and perfecting the method and so was able to use it successfully in the Mexican baby's birth.

"If you can avoid introducing a foreign virus into the embryo" that's best, said Zhang. "Nobody is really looking into this detail."

Knowles believes Zhang's comment highlights a major difficulty in the whole area of reproductive science which has not been rigorously examined.

"For the most part, it's only people in the know, like Zhang, who can point out some of the real technical issues and concerns because the technique itself has not gone through all of the steps of experimentation we normally would require," said Knowles.

With one-off experiments occurring in far-flung places -- minus rigorous scientific methods and randomized control trials -- it is not possible to compare the viral method versus the electronic to see how much viral DNA is left, how many generations it's passed to and which one is more successful.

Medical tourism is happening more and more. It's important to have global consensus about what's safe, what should be done and what shouldn't be done, said Knowles, since people with enough money can simply travel to the services they want.

Meanwhile, Zukin and Zhang are dealing with some of these actual patients -- couples with fertility problems who desperately want to get pregnant.

People want to be "genetically connected" to their baby, said Zukin, adding that in his experience -- 25 years in assisted reproductive technologies -- more than half of his patients prefer to remain childless when they cannot use their own egg.

Knowles said this is exactly the problem.

"Anytime that there is a real push on the side of need and fertility [and] disease relief, we find that the skipping of steps becomes more and more politically and scientifically acceptable," said Knowles. "Until something goes wrong."