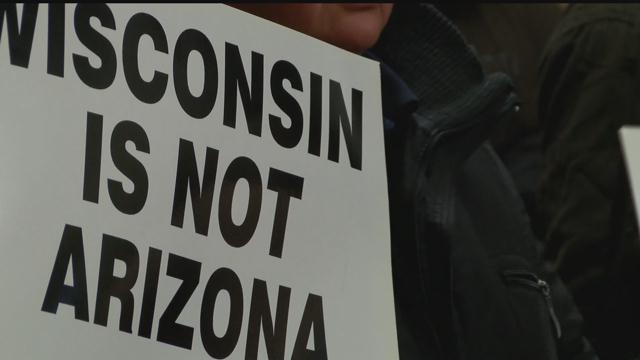 Representative John Spiros wants to bring an end to what he calls sanctuary cities with a bill that was heard at the Capitol on Wednesday.

And he said the point is to keep people safe.

"Safe from who, who are you scared of?"

In a jam packed hearing room, bus loads of people from the Milwaukee area joined with others from Madison to fight against the bill they call anti-immigrant.

"If this law is passed, I will not able to call the police for fear to they take me away from my family," said Arturo Teapila.

And it's that fear which is causing the city of Milwaukee to take an official stance against the bill.

The bill's author, Representative John Spiros said that the idea that illegal immigrants will be stopped while walking down the street or have their immigration status questioned after reporting something to the police is a huge misconception.

"This bill has nothing to do with that. This is not an immigration bill… this is a bill to protect us if somebody is charged with a crime," Spiros said.

The bill would only have illegal immigrants charged with a crime be reported to the feds. Three law enforcement groups are officially supporting bill.

But a Milwaukee city official said the misconceptions surrounding the bill are enough to stop some immigrants from working with police in Milwaukee.

"This is a vulnerable population instilling fear doesn't help us in dealing with the crime issues we have in our neighborhoods,” said the official.