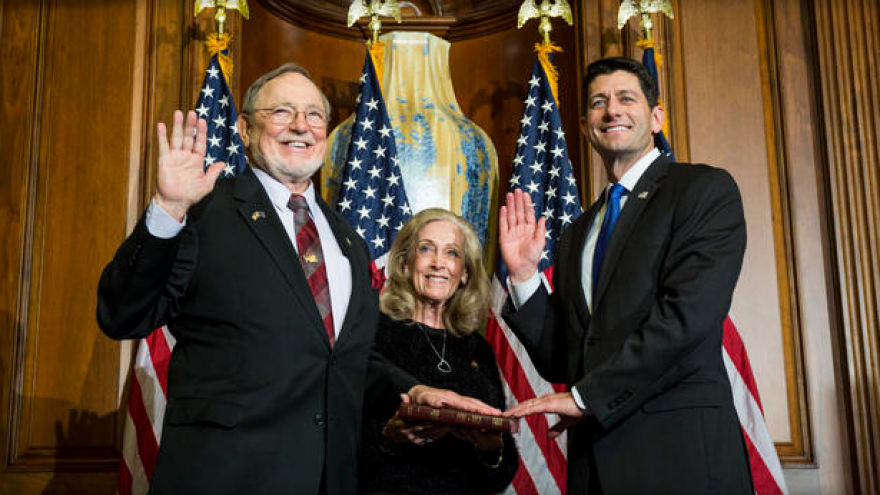 (CBS NEWS) Alaska's only congressman last week seemed to suggest Jews could have avoided being "put into the ovens" in the Holocaust if they were armed, according to a video recording of his comments at the Alaska Municipal League last week.

Rep. Don Young, a Republican, suggested "millions" of people died because they were "unarmed," according to a video recording uploaded to YouTube by Dimitri Shein, a Democrat who is running for Young's seat. Young made the remarks after Shein, who was present at the event, asked him what he is doing to make the schools safer for his children. Young, known for his gruffness, was made dean of the U.S. House of Representatives earlier this year, a largely ceremonial post that goes to the body's longest-serving member.

Young, before launching into his comments related to the Holocaust, noted how many die in car accidents, and blamed video games for moral decay.

Murphy McCollough, press secretary for Young, said the comments were "taken entirely out of context."

"Congressman Young's statement last week has been taken entirely out of context," McCollough said in a statement provided to CBS News. "He was referencing the fact that when Hitler confiscated firearms from Jewish Germans, those communities were less able to defend themselves. He was not implying that an armed Jewish population would have been able to prevent the horrors of the Holocaust, but his intended message is that disarming citizens can have detrimental consequences. A defenseless people are left up to the mercy of its leaders. In today's society, people are desensitized to extreme violence which the Congressman is very concerned about. Our children are surrounded by images of violence in social media, films and throughout the internet which has led to an alarming societal disconnect and isolation. Congressman Young remains committed to developing new solutions to bring our communities together and strengthen mental health services to address these issues facing our young people."

The idea that the effects of the Holocaust could have been diminished by gun ownership is not new among some outspoken Second Amendment advocates. Housing and Urban Development Secretary Ben Carson, in a book he published in 2015, suggested a similar sentiment.

"German citizens were disarmed by their government in the late 1930s, and by the mid-1940s Hitler's regime had mercilessly slaughtered six million Jews and numerous others whom they considered inferior," Carson said in a 2015 interview with CNN's Wolf Blitzer, "Through a combination of removing guns and disseminating deceitful propaganda, the Nazis were able to carry out their evil intentions with relatively little resistance."