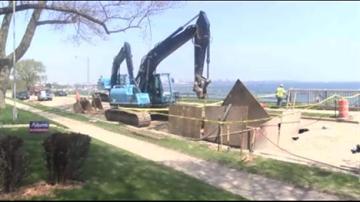 MILWAUKEE -- The total came to 82 water main breaks since mid May but that's all fixed. That was a result of a break at the Texas  Avenue pumping station in Bayview.

Work crews had the area along the lake torn up for a while but now it's fixed and running smooth.

The piping was re-lined to make sure it won't break again for a long time.

Mayor Tom Barrett said the total cost came in under budget by $200,000.

Mayor Barrett said the repairs were done in late June but the city wanted to test it all out last week. The pumping station passed the test and is up and running. However the story could have been much worse if not for a concerned citizen who called the leak in back in May.

\"When they came out after I called I remember they checked the hydrant and shut that off that didn't solve any problem,\" Hawley Boyce said.  \"So that's when they knew it was something to do with the pumping station.  That's when they started digging.\"

Boyce and a neighbor noticed water leaks and alerted the city.  The city found the problem and was able to get it under control before something much worse happened.